Big data in banking: Data lake instead of data warehouse?

IT departments of banks are increasingly facing the challenge that the need for settlement system-related information and data and their availability for analyses and evaluations is steadily growing. Previously, settlement systems mostly worked independently and transferred data via defined interfaces or reports in an agreed schedule, e.g. for controlling purposes or sales. Nowadays there are ever more requirements demanding real-time and flexible analyses of the entire operational data warehouse. Examples are the increasing regulatory initiatives and requirements for timely and more detailed information or requirements of the digitalization strategy of many institutions assuming the availability of real-time settlement information in the sales applications. A direct access to the settlement systems is usually not possible for reasons of stability and performance of the settlement systems. Thus, for example, turnover bookings in the daily business aren’t to be influenced by analyses for the customer portal. But also technical hurdles are a point against a direct access to the operational systems if they, for instance, are located on the host and decentralized applications are to be serviced or cost implications for transaction-oriented settlement models.

Setting up a data warehouse (DWH) in which the required operational data is saved, prepared and analyzed used to be a tried and tested solution pattern for fulfilling settlement-oriented information needs. 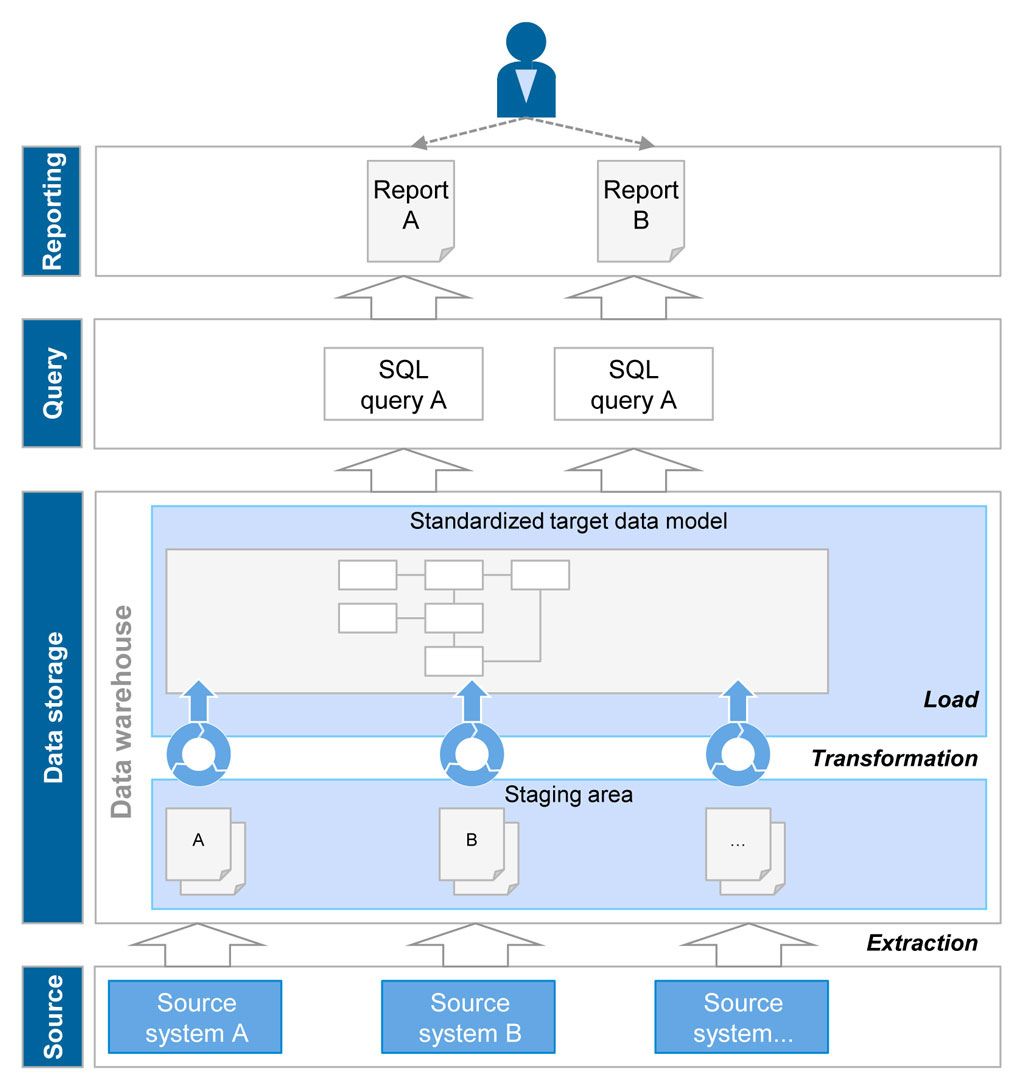 The required operational data is selectively extracted from the source systems and buffered on the entry level of the DWH (staging area). The extraction is usually made at regular intervals (daily, monthly, …) and at fixed dates (e.g. after final daily processing). Data is incrementally prepared, standardized and transformed in the target data structure within the DWH. The target data model is afterwards persisted whereas the initial data is usually overwritten with the next loading. Analyses exclusively access the target data model that comprises a consolidated view on the corresponding data warehouse. A relational database management system with a standardized SQL access for queries serves as a technical basis for a traditional data warehouse.

However, this concept reaches its limits with an increasing scope of requirements.

The data lake concept provides a remedy by making all required data for analysis purposes available at one place in a central and unchanged manner. In the next step only, a selective data preparation within specific analyses takes place. In this context, performing, flexible and cost-efficient processing is to be ensured by using big data technologies. 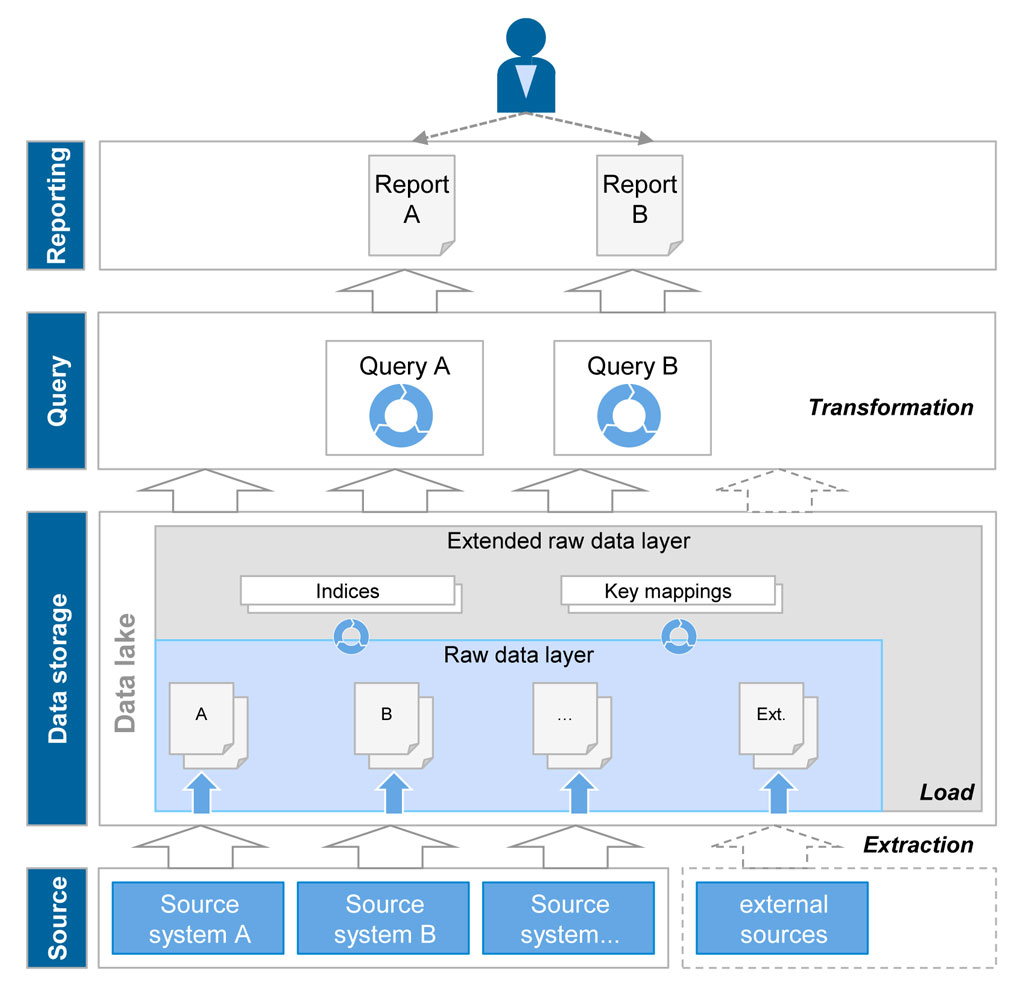 The initial data of the source systems is directly loaded into a raw data layer pursuant to the data lake concept without any logical transformations. The technology is usually not based on a relational database but on file system structures (Hadoop) or key value structures due to the aforementioned restrictions. Both approaches offer the advantage to dynamically deal with structural changes on the part of the source system and to process heterogeneous data formats (also unstructured). The raw data is, if needed, supplemented by key mappings or indices in an expanded raw data layer in order to allow for performing access, but doesn’t change its structure. Queries and analyses are directly made on the raw data layer but are much more complex in comparison with the traditional DWH since the harmonization and consolidation of information (transformation) have to be made as part of the queries in this context. Various big data technologies are available for defining and processing these queries that ensure a high and cost-efficient scalability via distribution mechanisms based on standard hardware. Since the data transformation is only made at the term of the queries, a flexible integration of further data (e.g. external information) is quite easy. Usually external data is not persisted in the data lake but only published via a link in the metadata. 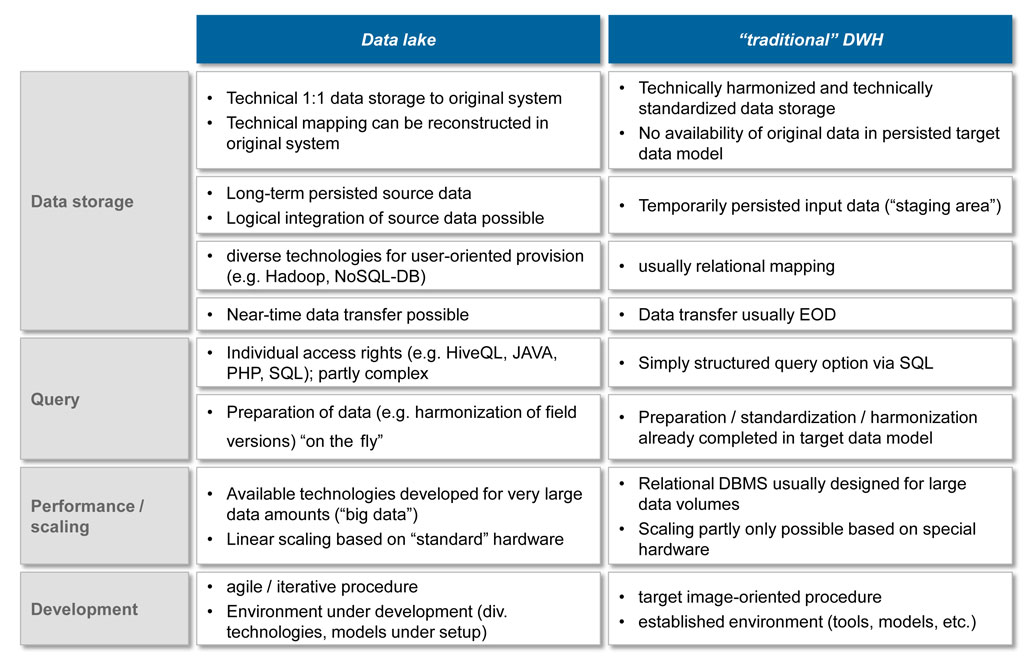 Prerequisites for a data lake approach not to be underestimated

The data lake approach is a promising alternative apart from the traditional data warehouse concept, however, it requires the fulfillment of a series of framework conditions.

The metadata and its management play a pivotal role because they are indispensable for the dynamic and proper access to the raw data. In addition to a subject-related and technical description of the data lake content, the metadata is to contain also information whether the raw data can be merged and transformed. The creators of queries and/or the BI tool used have to be able to find out from the metadata if and how the customer data from system A can be combined with the product data from system B. A consolidated key relationship such as in the traditional DWH ensuring a standardized combination for all analyses is not provided in the data lake.

As a result, the overall requirements for the users of a data lake are on the increase. Free analyses of data should only be carried out by experts (data scientists) who know the relationships of the raw data very well. Predefined queries and reports or sub-data portfolios with a comprehensive metadata description, however, can be used by several users. Thus, the data lake often differentiates between an exploratory expert area and a secured user area. All in all, it can be concluded that complexity and expenses are shifted from data storage to report and analysis setup.

Besides, a major challenge is the security issue. The benefits of the data lake increases the more detailed and varied the available data is. At the same time, not all users should be granted access to the entire data warehouse of an institution, in particular from compliance perspective. This requires respective security mechanisms restricting the access as far as needed, but as little as possible.

The question of the better concept for providing operational data for analyses cannot be answered in a general way but depends on the specific requirements. If the aforementioned framework conditions for setting up a data lake can be fulfilled, this concept can be used for the following requirements:

The traditional DWH still has its strengths if the analysis focus has a defined scope and if standardized queries are made oftentimes. It is also the preferred concept if a consolidated overall view is required that has to be consistently queried from different users.

Both concepts can be combined in a sensible way. Thus, a data lake can serve as a staging area for a traditional DWH since the raw data only has to be provided once for different requirements and is available for a long time. At the same time, the target data model of a DWH can be made available in the data lake which provides its consolidated data warehouse for more flexible analyses.

A data lake can be set up as addition to the existing DWH and can be incrementally integrated in the existing system landscape. 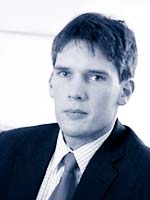