Home » Blog » Are banks worth more dead than alive?

Are banks worth more dead than alive?

Classic Net Present Value (NPV) techniques define the value a project, a firm, and potentially a whole industry, as the sum of probability-weighted discounted profits and losses. However, this approach can produce misleading results if asymmetric risk sharing arrangements between owner and debtors are ignored. Here, option-pricing theory may better explain the conundrum of low profits resulting in comparably high valuations. I derive three seemingly surprising propositions for the banking industry that run counter to conventional wisdom.

Return on Equity (ROE) in the banking industry has suffered significantly during the past decade. While the drop caused by the financial market crisis (2008/2009) has been partly offset in the past 5 years, a new, lower equilibrium ROE seems to have established itself. In the U.S., bank-wide ROE has settled around 8-9%, some 4 to 5 percentage points lower compared to ROE’s in the years prior to the banking crisis (see Fig. 1). Comparable data for European banks paint a picture that is even grimmer. 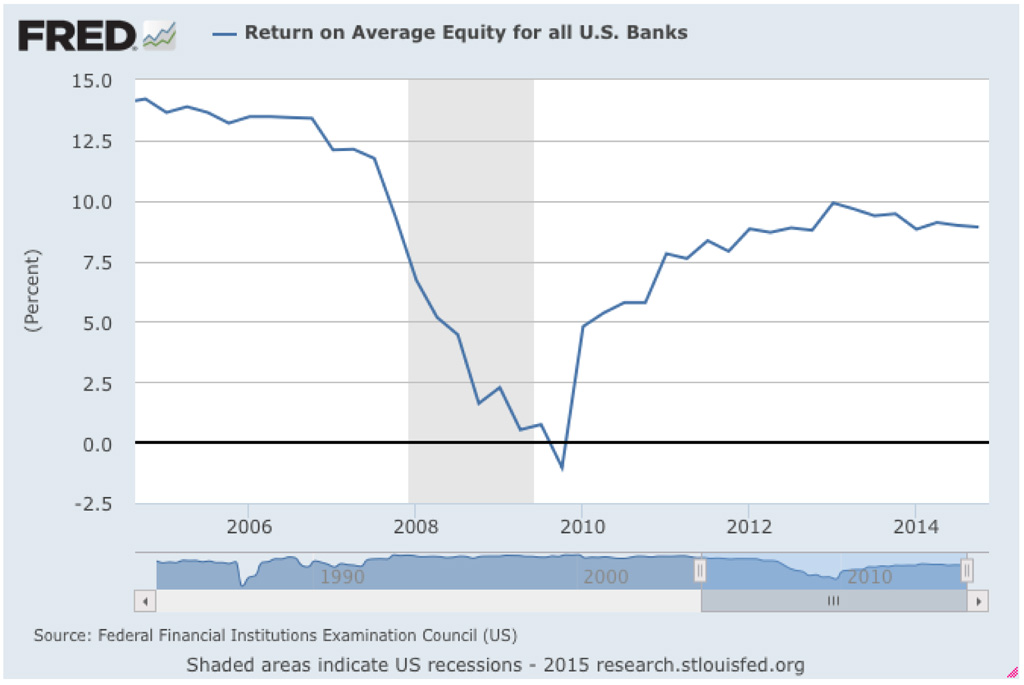 Indeed, valuation of U.S. banks has suffered some 40% from pre-banking crisis levels (see Fig. 2) reflecting the reduced ability to deliver ROE in the banking industry. But why not more so?, one may ask. If ROE is approaching cost of equity, or even falling below, shouldn’t banks, at some point, be worth more dead than alive?

To illustrate the role uncertainty can play in a simple valuation exercise, let’s consider the following example: An Equity (EQ) investment of 5 is assessed for a project with cash flows depicted in Fig. 3. For simplicity, the discounting rate and the risk-adjustment for uncertainty is assumed to be zero. Note that the expected Equity value is max(0,E(V)) due to the equity owners’ explicit put option (share prices cannot be negative).

Proposition I: The closer the banking industry’s ROE is to it’s COE, the bigger a role uncertainty plays as a factor increasing the value of equity

This may sound counter-intuitive at first, as many observers lament over the growing uncertainty surrounding the banking business (increasing regulation, FinTech innovations etc.), portraying those forces as a potential threat to bank valuations, when in fact the opposite could be true: If there was complete certainty about the banking and market environment (i.e, the years 2016, 2017, … to be expected similar to 2015), many banks would be worth nothing (from an equity perspective). It is precisely the uncertainty that, in combination with the option-like asymmetric character of Equity, creates the equity value of banks. An increase in uncertainty raises the equity value! Option pricing theory teaches us that the value of uncertainty is the highest when the option is at-the-money (ATM). In case of the equity value of a firm, ATM can be interpreted as the situation where return on equity (ROE) equals the cost of equity (COE).

Proposition II: The less we know about the future, the more we need current banks

If we knew for sure which banking business model will be successful in, say, 10 years, the market valuation of banks following a different strategy would immediately drop to zero. It is the fact that we don’t know the winning strategy of the future that requires investors to include all banks in their portfolio to make sure the future winner is not accidentally excluded. Who will be the Google, the Amazon, the Apple of the banking industry? Until this can be answered with more clarity, all banks are potential candidates of becoming a champion.

Economies of scale have changed dramatically since stricter regulatory requirements have added significant fixed costs to the business (especially in departments such as legal, compliance, IT, operations etc.). Those market participants short of reaching critical break-even market-share levels have to make a strategic choice between either absorbing other (equally unprofitable) players, or to sell their own franchise to someone else. As long as there are a few market participants expected to adopt a growth-strategy, there is a takeover premium priced into the equity value of potential acquisition targets. As in Proposition I, the uncertainty about who will be a potential subject of acquisition causes the takeover premium to be spread across all banks for the time being.

Those three propositions run counter to conventional wisdom, suggesting changes in the banking industry are hurting bank evaluations. It is precisely during times of high uncertainty when banks can get away with low ROE’s. It is only after the fog of uncertainty has been lifted that a sufficient ROE once again becomes a conditio since qua non. 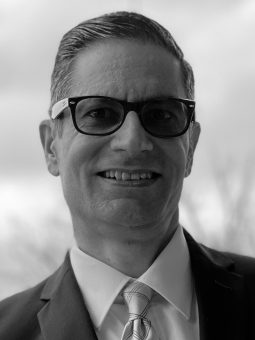