The final design of the new Basel IV: Standardized Measurement Approach (SMA) is less conservative than proposed in the consultation paper—however, the impact on capital requirements will, for some banks, still be severe.

The Basel Committee on Banking Supervision (BCBS) has finalized the Standardized Approach (SMA) for calculating the capital charges for operational risk.[1] Compared to the consultation paper, the approach has mainly stayed the same: the SMA consists of the two components Business Indicator Component (BIC) and Internal Loss Multiplier (ILM for short), which are multiplied by each other.[2]

Figure 2: Bucket logic for calculating the business indicator component. Compared to the consultation, the number of buckets and weighting were adjusted.

Furthermore, the service component which is integrated into the business indicator component, has been simplified and the financial component slightly modified.

Figure 3: formula of the loss multiplier

As a result of the exponent 0.8 (in consultation 1), the above-average losses are weighted less in the loss multiplier (on the other hand, the reduction of capital requirements for banks with below-average total losses is also comparatively lower). In addition, the weighting of losses on the amount of losses is eliminated! I.e. all losses from past operational risk events are considered equal in the loss multiplier, regardless of the individual loss amount.

The Basel Committee on Banking Supervision allows national implementation options in the design and application of the loss multiplier:

To assess the impact of the new SMA on capital requirements, the Basel Committee published the results of its Quantitative Impact Study simultaneously with the finalization of the new approach.[3] The analysis considered data from about 150 banks (thereof 28 G-SIBs) and simulated changes in minimum capital requirements by introducing the new OpRisk SMA. Differentiation was made between “large banks” (banks with Tier 1 capital > 3 billion EUR, which are internationally active) and “smaller banks” (all other banks). Among the large banks, the G-SIBs were again considered separately. The results are illustrated in the following figure: 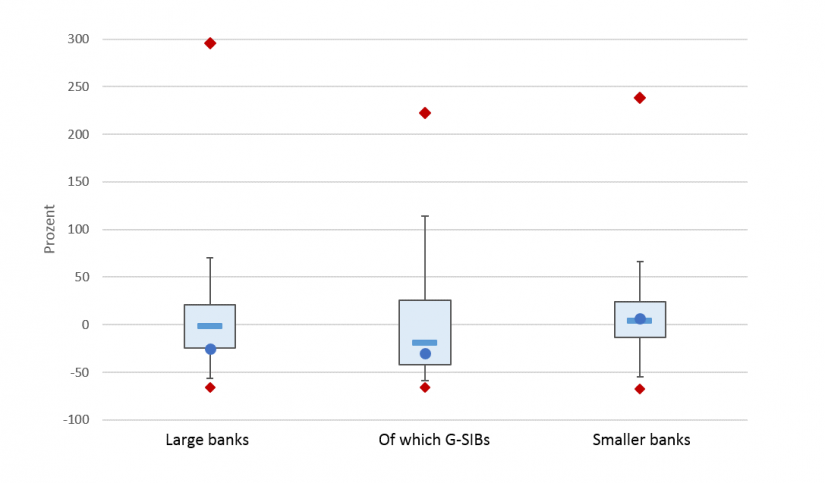 Removed from the median / mean analysis, figure 4 shows that the impact on capital requirements for the individual bank will in many cases be severe:

The SMA will be mandatory as of January 1, 2022. Despite the obligation for application, which from today’s perspective is very late, timely measures are required to prepare for the implementation of the SMA:

The finalized SMA replaces the three existing approaches to determining capital charges for operational risk. Compared with the consultation, adjustments have been made to the approach, which make the increase in capital requirements more moderate than was “feared” in the consultation phase. Nonetheless, analyses show a very strong impact on capital requirements for many banks. To avoid unpleasant surprises, it is recommended that preparations (data history, calculation of capital requirements, adjustments to internal processes) should be made early on. The SMA is applicable as of January 2022.

One response to “Basel IV: approach for determining the capital charges”