FinTechs—About the positioning and possible actions of banks

They are on everyone’s lips and not one day goes past without media coverage: FinTechs. Start-ups and small companies specialized in technical and financial issues that set themselves the goal to turn the banking environment upside down. Are the ambitious goals of the young companies justified and are they actually a threat for banks? Are they only required for waking up banks and forcing them to become more innovative? Or should banks even harness the opportunity to cooperate with FinTechs? These and further questions as well as possible actions will be examined in the following.

FinTechs from Rocket Internet such as Lendico or Zencap, but also companies like Wikifolio, Kreditech and Zettle by PayPal should already be known to quite a number of people, since many of them have already become part of our everyday life. At the latest when paying the next cab bill by card and finding the latest named company on the card reader, one will become aware of the fact. There are several hundreds of FinTechs operating in the German market and for sure they are not all as popular as the ones mentioned before. Nevertheless, some business models recently succeeded in catching the attention of (potential) customers. Thus, for example, Number26, a current account and payment app, has gained already more than 20,000 interested potential customers since the official launch on January 26, 2015[1]. As maximum 150 persons can be registered per day due to operational restrictions, people are put on the waiting list for several week—hence the customers are willing to stand in line for a bank product. Such a success is only possible thanks to an underlying characteristic feature of nearly all FinTechs: they concentrate on a partial segment in the bank’s value chain and develop a product according to the slogan “better, cheaper, faster”. FinTechs use their small company size compared to banks for flexible actions. Figure 1 represents an extract of zeb’s innovation monitor that covers many hundred FinTechs and segments it by business model types: 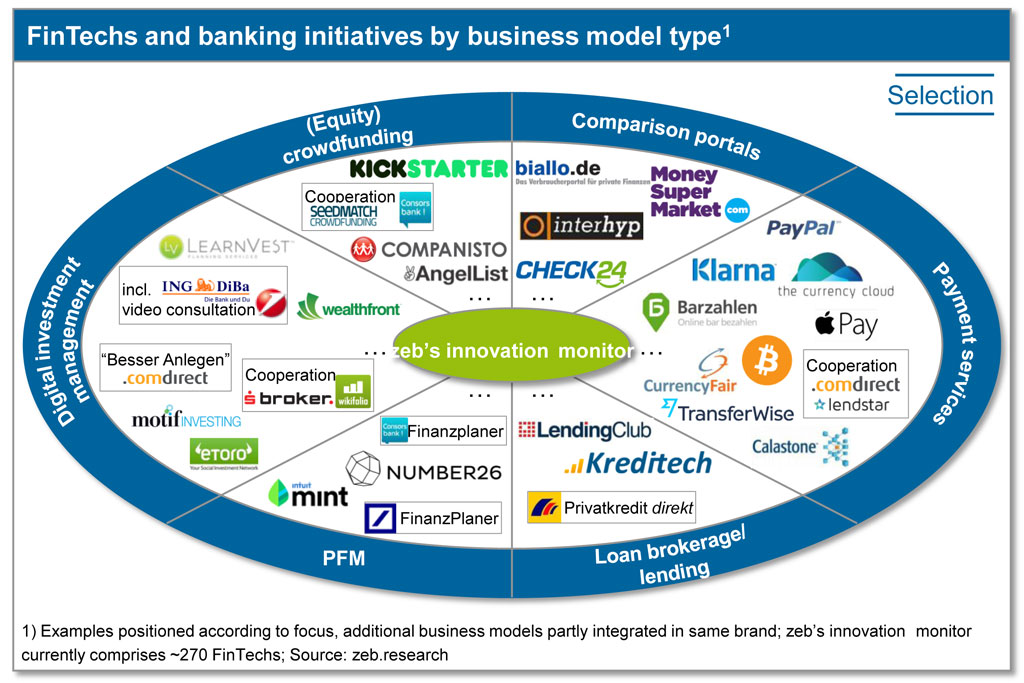 Profitability: The most important key figure, isn’t it?

First of all the question arises how FinTechs can generally be assessed related to their profitability. Established banks are clearly measured by defined key figures, but regarding to FinTechs, this process isn’t clearly defined and thus often lacks transparency. Many rounds of financing, that are needed by young companies, can at the same time be a good or bad sign. For investors the profitability is not the most important trigger. A more differentiated view is necessary. Why is it that: Lendico was valuated with EUR 120 m at the time of Rocket Internet’s IPO although the annual loss of the self-named emerging star accounted for more than EUR 3 m for this year—a positive net result hasn’t been achieved yet.

So what are the key figures that are most important for FinTechs? One significant key figure has already been mentioned in the introduction: customer acceptance. This means that customers are willing to try out and accept new business models and sales channels. Thus, for example Number26 cooperates with another FinTech that legitimates the customer at any time (24/7) with the help of an app (IDnow). Hence, the German PostIdent procedure, that required the walk to the post office, is out of date. There is no easier way to enhance another fundamental key figure: customer benefit. It is comfortable and significantly faster to conduct the legitimation at home than standing in line in a branch – no matter if it is in a bank or in a post office.

The actual danger from FinTechs is that they put banks in the rear which then lose the contact to their customers. With FinTechs occupying the customer interface, the relationship between the bank and its customers is diluted and the bank still in its settlement role moves from the field of vision of the customers. Banks specialized in acting in the background often provide better future prospects already today. Thus, analysts are predicting Wirecard, the cooperation partner of e.g. Visa, American Express and Number26, a promising future reflected in a high market value and price earnings ratio. The latter accounts for more than 33 and is consequently more than twice as high as it is the case of established banks, such as Commerzbank and Deutsche Bank.

Four potential options how banks can position themselves better against or with FinTechs are demonstrated in the following.

As the name implies, banks invest in FinTechs when applying the purchase option. A thorough examination prior to the investment decision is an integral part since the young company has to fit to the strategy and alignment of the investor completely[2]. In future, FinTechs will then be continued on a long term as subsidiaries in the banking group. The advantages of the purchase option are on the one hand the opportunity to actively shape digitalization in the banking environment and on the other hand the rapid implementation of unique selling points of FinTechs as well as their customer benefits in the existing infrastructure of the bank. Disadvantages may be that the products of few FinTechs become established at the market and, as introduced before, that the number of FinTechs foundations is currently on the rise. As a consequence, a profound examination is required which, however, cannot protect banks from unprofitable investments.

The acquisition of the FinTech Simple through BBVA, the second largest bank of Spain, serves as an example of applying this option in practice. BBVA paid almost USD 120 m for the company founded in 2009 that doesn’t have a branch network and convinces thanks to a simple interface between the customer and the bank.

The second possible action is the option of cooperation: Here, banks and FinTechs cooperate as service providers. Since the latter often offers its service in the fields of B2B, both cooperation partners have to define common interfaces that are, for example, used by IT systems for reasons of communication. These organizational and technical challenges are to be coped with. If they succeed, customers of established banks can benefit from the advantages of FinTechs—and the risk of customers willing to switch on the part of banks will be reduced. Hence, Commerzbank just as Number26 recently introduced IDnow’s online legitimation . Be it via smartphone, tablet or computer—potential customers can become actual customers within only a few minutes. Therefore, the start-up from Munich benefits from a high number of new customers of the second largest bank in Germany and Commerzbank in return benefits from the speed and simplicity offered by the app to its customers. This process is described in the following video:
[youtube https://www.youtube.com/watch?v=mL_WQ0hkq1k]

The build option, the third possible action implies that business models for FinTechs are developed by the bank itself. Banks often face restrictions related to the organization and IT due to the long existence and the components that are not always adjusted to current standards. Therefore, this option is used by founding the FinTechs outside of the bank—mostly in a 100% subsidiary—where these restrictions don’t exist. After the successful development of the FinTechs, the business model is transferred and integrated in the bank together with the new processes. Thus, Erste Group in Austria launched a foundation hub with the BeeOne digital workshop pursuing this business concept.

Individual processes of the value chain within the bank can be improved from customer perspective and adjusted to the era of digitalization. Within this context, however, the common passivity of the organization has to be overcome and the willingness to implement new processes has to be present. The often existing fear of cannibalization of the own processes has to give way to the flexibility and agile way of working as a FinTech. This is also the greatest challenge of banks since they have to leave their comfort zone. However, established institutions do have the advantage that they can build upon the existing customer network. Few banks already use this option. Sparkasse Oberpfalz Nord for example offers within its s@on project online consultancies in a virtual conference room and a subsequent product sale—it goes without saying that it is performed online as well.

So what is the most suitable alignment for banks? The answer is: it depends. Generally, there are no universal answers to the demonstrated options. But it has to be underlined that there is a basic need for digitalization of established banks. There are no other alternatives than the cooperation and optimization option. The two remaining options are to be examined thoroughly especially with regard to the sometimes high investments. The most promising way is often a mixture of the proposed possible actions. Thus, several banks already pursue a strategy combined of the purchase and cooperation options in order to position themselves. It can also be assumed that parts of the internal value chain are optimized and replaced by digital processes. Whatever strategy is chosen, one thing is indispensable: digitalization is in full flood and there is a major need for action for established banks if they don’t want to lose their customers.

[2] The purchase for purely financial reasons is to be neglected within this illustration. We presume a purchase as result of strategic decisions. 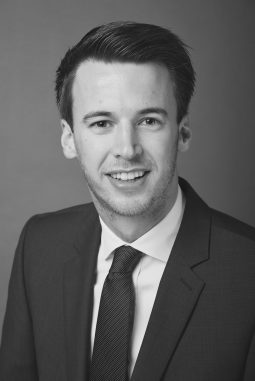 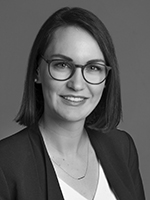