You might know the feeling—everyone is talking about blockchain and articles are being posted or printed everywhere. And then the contradictory statements: blockchain is the technology behind bitcoins, but cryptocurrencies are not all that important—that’s not what it’s all about.” OK. Sure. So what is it?

While blockchain was originally developed as a booking system for bitcoins, its range of possible applications go far beyond the cryptocurrency. As a decentrally saved and manipulation-proof database (ledger) of transactions, blockchain offers a completely new concept of infrastructure for registering, safekeeping and exchanging information, e.g. assets of any kind. These could be financial products, but do not need to be. Especially when considering the aspects of security, cost savings and speed of settlement, blockchain possesses major potential for disruptive changes to the intermediary services.

Assume you are an art collector. You are particularly fond of paintings from the 19th century. You are pleased with your beloved works of art, which you publicly display from time to time. Part of your motivation for exhibiting the paintings comes from the tax office, because you can only make tax-free capital gains if you exhibit the artworks in public from time to time.

This is where it becomes sensitive. Hopefully you know the history of your artworks without any gaps. And hopefully you informed yourself well before buying any works (you should know whether it was ever looted art). As soon as artworks that were unlawfully taken in the past are discovered by their legal heirs in an exhibition, it can become very difficult and expensive.

Many art collectors painstakingly reconstruct and prove the history of their artworks, for example through art exhibition catalogs. This works as follows: the 1954 exhibition catalog from Kunsthalle Basel states that this artwork belonged to family X at this point in time. The catalog from the NRW art collection from 1987 states that the lender at the time was family Y, etc. There is a lot of paper to search through for a large collection. Old exhibition catalogs, assuming you are even able to find them, can then cost CHF 1500 or more in Swiss antique stores.

What an outdated system! Blockchain saves this information decentrally in the world wide web (in the cloud). This is clear and manipulation-proof: bad for unlawful owners and catalog traders, but good for legal owners. Plus, there are tremendous application potentials. Think of blood diamonds, rare old-timers, plots of land and buildings in countries without land registries… and of course, assets and exposures in the financial services sector.

How does a blockchain work?

The blockchain technology can consistently store any kind of data information in a public history with a high level of security.

Figure 1: Process description of a blockchain

The way that blockchains work is described in the following seven steps:

Top companies have begun to invest in the potential benefits of blockchain technology. Already today, there is a major interest from investment banks which have gathered in the start-up R3 CEV. In the mean time, 35 large international banks have joined the initiative and the number is growing. But, there is also an increasingly intensive discussion and examination of the topic from many other banks on the market.

Can blockchain become a revolution?

It goes without saying that there are still numerous issues to be resolved.

Blockchain can undoubtedly cause far-reaching changes to banking business; it has the potential to significantly reduce the structural IT costs, to simplify the process map beyond our imaginations, while also considerably increasing transaction speeds. In total, a substantial simplification is expected, which will also require fewer personnel.

All banks should ask themselves what the individual opportunities and risks they expect from blockchain technology are and derive their own approach from this position. The recommendation for financial service providers is thus clear: to be able to shape blockchain at an early stage, each financial institution must deal with the topic now. Everything else would constitute gross negligence. 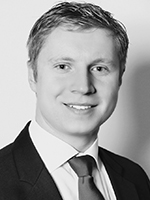