Home » Operations » Transaction platforms: a solution to the NPL rebus?

Transaction platforms: a solution to the NPL rebus?

In the wake of the global financial crisis, the exponential rise of non-performing loans (NPLs) within the balance sheets of financial institutions has been a reason of great concern across Europe. From 2008 on, NPL volumes have grown consistently, reaching a peak of about EUR 1.2 trillion at EU level in 2014 and therefore increasing the region’s NPL ratio to about 7%, i.e. more than three times the pre-crisis average.

The NPL rebus: the state of the art

At country level, the regions with a poorer economic health have suffered the most from the impact of credit quality deterioration; among them, Italy, in particular, has been put under special surveillance by EU authorities, since it alone accounted for more than 20% of the overall EU NPL portfolio. 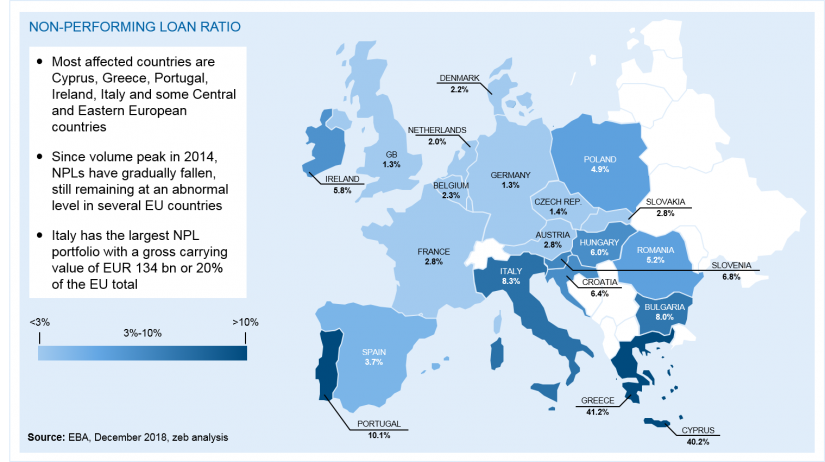 Given that it is widely agreed that an elevated stock of NPLs negatively affects banks’ ability to lend and their overall profitability, in the last few years both European and national regulators have put a great deal of attention on the topic. Among others, the following aspects have been subjects of intervention:

Nowadays, the set of solutions available to banks dealing with NPLs is quite broad, ranging from on-balance sheet measures such as the establishment of internal workout units to off-balance sheet measures such as the disposal of assets through SPVs or direct sales. While the former potentially grant higher financial benefits to originators but bring conspicuous fixed costs and absorb internal resources, the latter represent a more rapid solution but may not be viable for small and undercapitalized banks, since they expose sellers to high transaction and one-off impairment costs.

Since 2014, all efforts made by EU regulators have started to pay off: though volumes remain at an abnormal level by historical standards, the trend in NPL stock accumulation has clearly inverted, thus reducing overall volumes to about EUR 660 billion in December 2018.

Despite the reduction of NPL stocks and notably in view of  the gloomier economic outlook, pressure on banks will remain high also in the future, thus permanently changing the way banks should deal with troubled assets. The recent normative action of both the European Commission and the ECB on prudential backstops are a clear sign of changed expectations of regulators. Their stricter rules on minimum levels of NPL provisioning aim at mitigating the risk that banks will again build up stocks of troubled assets.

In this “new normal” environment, financial institutions should quickly adapt their NPL strategies: the application of the “wait and see” approach—very common in the past—will be extremely unwise in the future, since keeping a high level of NPLs in the balance sheets for long periods of time will immediately translate into high provisioning costs. Consequently, banks will be pushed to reduce their in-house management of NPLs and regularly address the market in order to dispose NPLs in high frequency, small-sized transactions.

As far as asset sales will become an ordinary part of banks’ NPL management procedures, it is clear that the establishment of an efficient and properly functioning market is a major priority for regulators. Indeed, the secondary market should guarantee frictionless access to the widest possible range of investors, absorb different types of assets, be fast in matching supply and demand, and provide fair pricing mechanisms.

According to this perspective, it is positive news that in the last 2 years, market forces have been unleashed with NPL transaction volumes constantly rising, especially in Italy where volumes moved from EUR 9 billion in 2014 to around EUR 70 billion in 2017 and 2018. 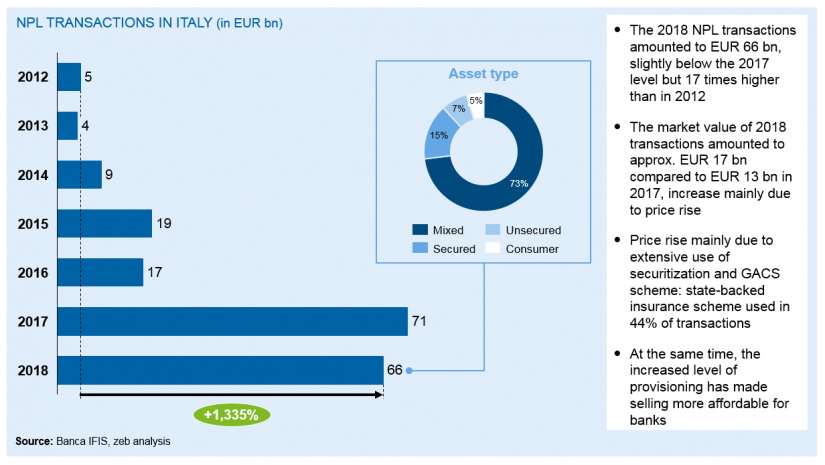 Nevertheless, in the past years, the NPL market showed clear signs of failure with an inefficient pricing dynamic, which translated into wide bid-ask spreads. According to an ECB analysis[5], NPL market frictions can be attributed to some intrinsic characteristics:

In conclusion, it is clear that market efficiency remains a reason of great concern, particularly because the recourse to the market as a means to unload stocks of troubled assets only remains an option for banks with sizable NPL volumes. In this scenario a new kind of player, i.e. the platform dedicated to NPL intermediation, is frequently being discussed as a potential market accelerator that is able to open the market to a widest possible audience of sellers and investors.

Platforms dedicated to NPL transactions are marketplace-like tools that allow banks to put their NPLs on sale—even in small portfolios—by following standardized processes and with the purpose to expand the investors’ audience by including unconventional players which usually fail to participate in the market because of a lack of size and skills. Unlike AMCs, platforms do not own assets and are a market-oriented type of solution with a limited role of authorities. 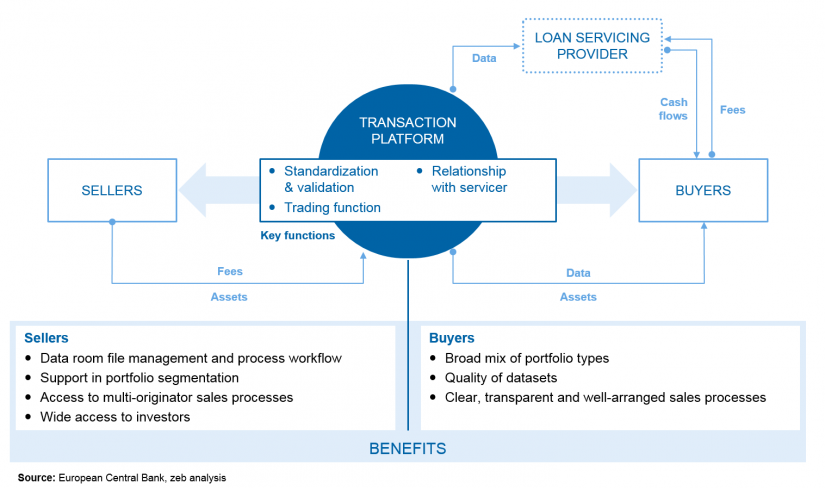 A standard model of a platform covers three key processes: first, it acts as a data consolidator that collects both qualitative and quantitative information on loans through clear workflow-based processes and standardized data tapes. This data-keeping function which guarantees comparability, easy access and high quality standards is the ”killer application”, making the overall transaction process faster and more cost efficient and reducing asymmetries between players.

Second, it is a centralized point of contact: the platform gathers multiple investors in a single place, allowing sellers to reach out to a wider market and buyers to create their own NPL portfolio, composed of assets originated by multiple banks. Moreover the platform could provide value-added services such as portfolio composition for matching buyers’ needs with available assets, tools for facilitating club deals, preferred relationship with the servicers.

Finally, it is the overall controller: the presence of a process owner, which guarantees transparency and fairness, is the main lever to reduce information asymmetries and increase the level of trust among the parties. This function paves the way to the provisioning of further complementary services such as the aforementioned data quality check and data accessibility, the auction mechanism, which allows market-driven pricing, and the independent advisory services that a platform can provide on legal, RE and other topics.

Therefore, platforms provide clear advantages becoming a functional ecosystem for both buyers and sellers. On the one hand, sellers have an efficient access to the market even for the disposal of small portfolios with low transaction costs, the guarantee of a fair pricing mechanism, and the possibility to have on-demand advisory services. On the other hand, buyers have the opportunity to buy NPLs in a safe environment where also small players are allowed to make transactions, information is checked and supervised by an independent third party and it is easy to establish a relationship with the servicer.

Although transaction platforms are widely considered as one critical element of the framework designed by regulators to tackle NPLs, a few limitations still slow down the adoption of these marketplaces:

Next steps: trust and cultural change

In the near future, we expect a structural change in the NPL market: as major banks will get rid of their older stocks and new regulations on provisioning will be operational, we may expect a “retailization” of the market, with a shift from a few mega deals to numerous high-frequency and small-sized transactions. Low transaction costs will be a key success factor for the arrangers—one of the reasons why transaction platforms with their convenient and efficient access to the market even for small tickets could be the market winners.

Although a few private players have developed transaction platforms[6] and their services are currently available to sellers and investors, at the moment none of them has reached significant transaction volumes. One possible reason for the low usage could be that the majority of deals are still big-sized, private transactions where platforms do not provide a clear advantage.

A second possible reason could be a lack of trust of the management of financial institutions in market tools such as transaction platforms. Indeed, credit management has always been an internal and confidential activity. Changing this approach and collaborating with external players on a daily basis requires a cultural change that can only be promoted through a clear understanding of the new environment. In this respect, the behavior of regulators called to set transparent rules and the willingness of big banks to implement new operating approaches will be crucial. 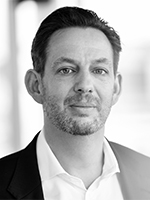 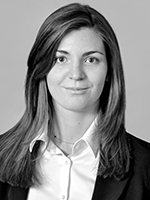 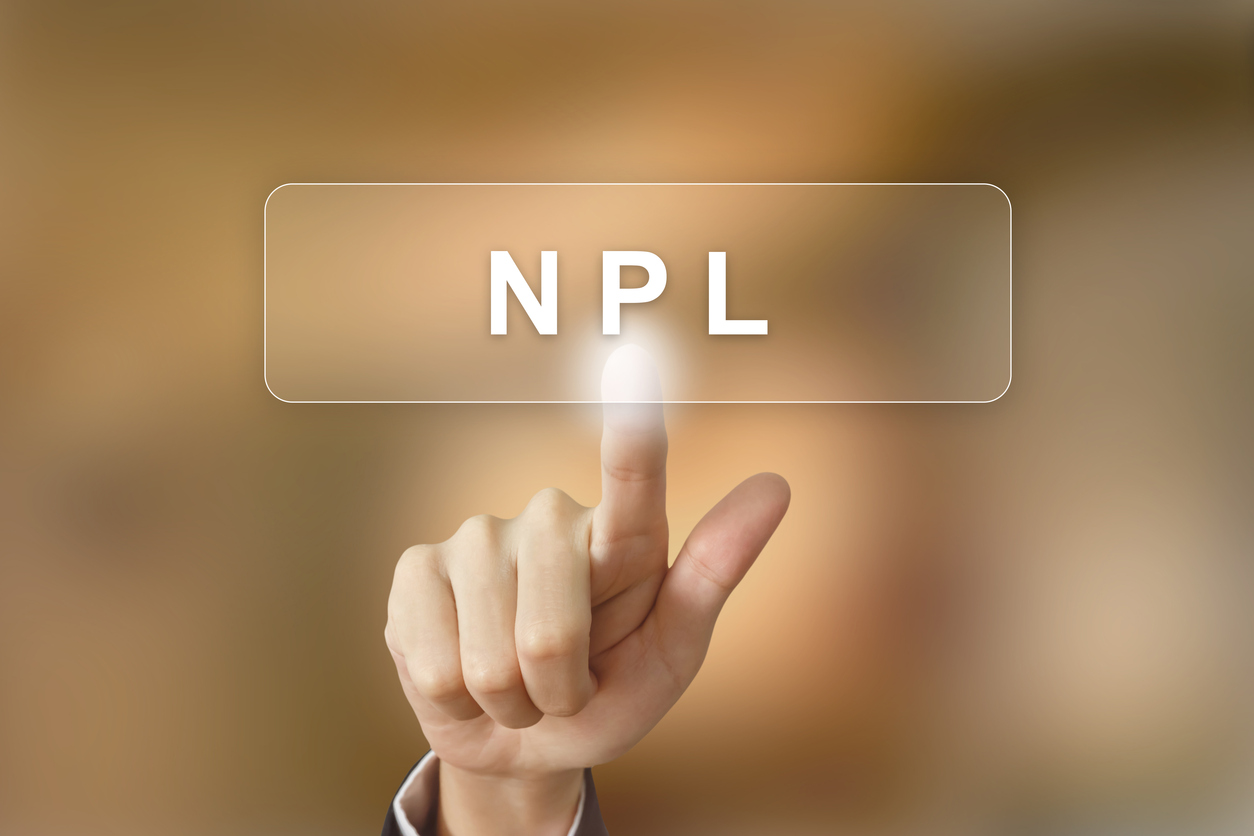 “The sooner, the better”: a pro-active approach to NPL management

Call for action (not only) for Italian banks: why and how to address credit quality issues at an early stage