Home » Research & Markets » Rebirth of the deposit business: is a “battle for deposits” looming?

Every quarter, zeb.market.flash provides an overview of the performance of the world’s largest banks (measured by market capitalisation). The relevant factors are briefly and concisely described, analysed and classified by our experts. For our analyses, we take a close look at relevant indicators for the valuation of the capital market, such as stock returns, as well as macroeconomic and bank-specific drivers. This issue deals in detail with our special topic “rebirth of the deposit business”.

Bank stocks beat all other sectors in Q3 2022

After significant corrections on global capital markets in the second quarter of 2022, markets stagnated in the third quarter (MSCI World TSR +0.7% July-Oct. 22, market capitalisation +5.3%). Global top 100 banks outperformed the market and all other sectors in terms of TSR performance (+5.5% July-Oct.) – further interest rate increases contain more advantages than disadvantages for banks, most Q3 results were better than anticipated by analysts, and high levels of state support keep provisioning levels low – for now. 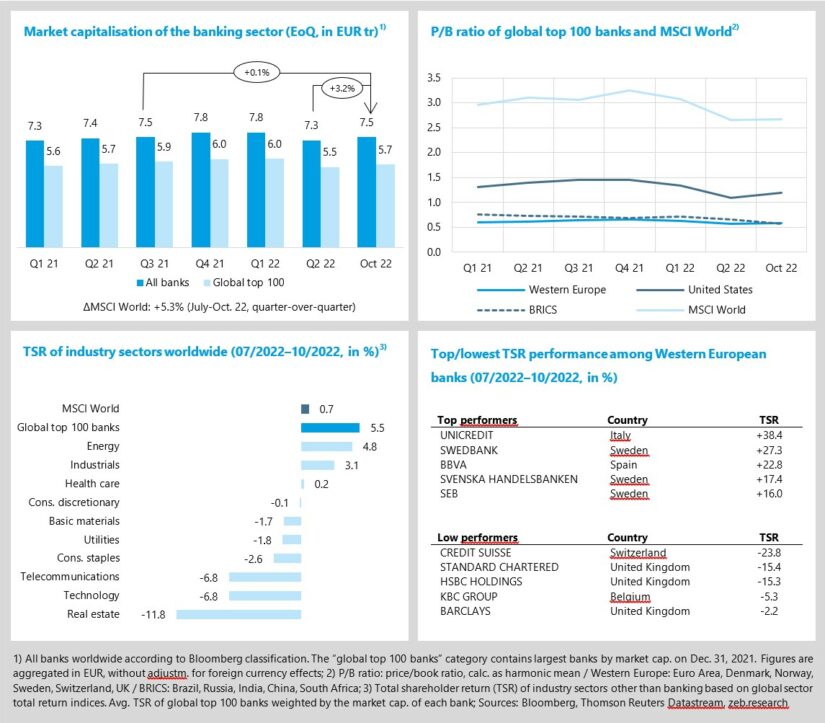 Recession is looming and central banks continue to fight inflation

Economic growth is dampening significantly across the globe and a recession, at least in Western Europe and the U.S., is unlikely to be avoided. Inflation rates remained extremely high in Q3 22 YoY (U.S: 8.3%; Western Europe: 9.0%; Germany: 9.4%), except for the BRICS region (4.6%), forcing central banks to continue their decisive fight against inflation by further raising interest rates. The more decisive actions of the U.S. Fed compared to the ECB, coupled with a harsher impact of the Russia-Ukraine war on Euro area economies, caused a further deterioration of the EUR/USD FX rate. To a certain degree, U.S. Fed’s task to bring down inflation is slightly easier than that of the ECB – U.S. inflation is mainly demand-driven, and core inflation levels are lower. 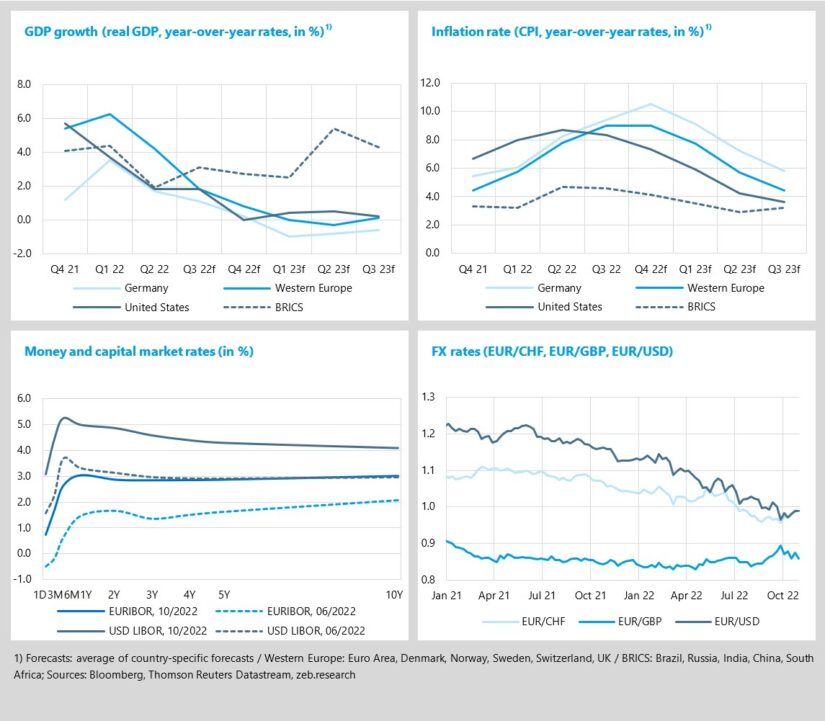 Compared to a very strong second quarter 2021 that benefitted from positive catch-up effects after the COVID-19 crisis, profitability of U.S. and European banks is down YoY in Q2 2022 (ROE: -4.3%p and ‑1.2%p, respectively). The massive rise in interest rates led to higher net interest income figures at almost all institutions. However, this positive effect was more than fully offset by lower income in investment banking, an overall higher cost base, and higher credit risk provisions. Especially U.S. banks already started to prepare themselves for the impacts of a looming recession by increasing their loan loss provisions in Q2 2022 (+17bp QoQ, +44bp YoY) slightly dampening their profitability. 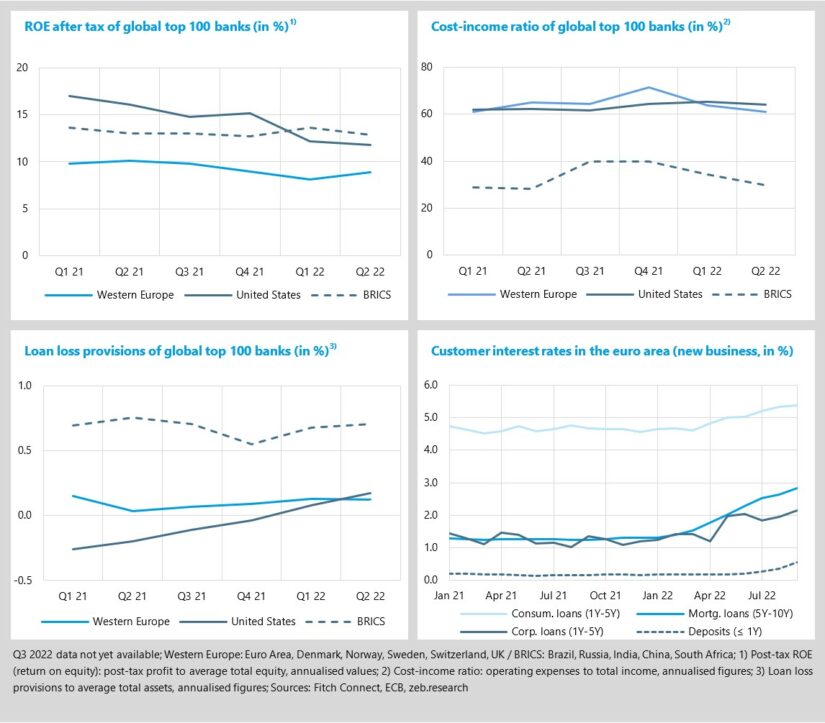 For banks, this has a multitude of effects. Rising credit rates hamper the previously strong demand and an increase in credit risks is highly likely in the near to medium future. Inflation significantly pressures the cost base of banks. Volatility increases market price risks, and the 2022 downturn of equity and bond markets will cause higher securities write-offs – at least in 2022. Of course, there are also positive effects for banks operating in this new regime. If well steered, treasury might be able to generate sizeable profits again and most importantly, deposit products will become attractive refinancing and revenue generating products again. In this editions’ special topic, we put a spotlight on the rebirth of the European retail deposit business – how did it fare historically, how will it likely develop and what is the playing field in terms of market size, but also competition. 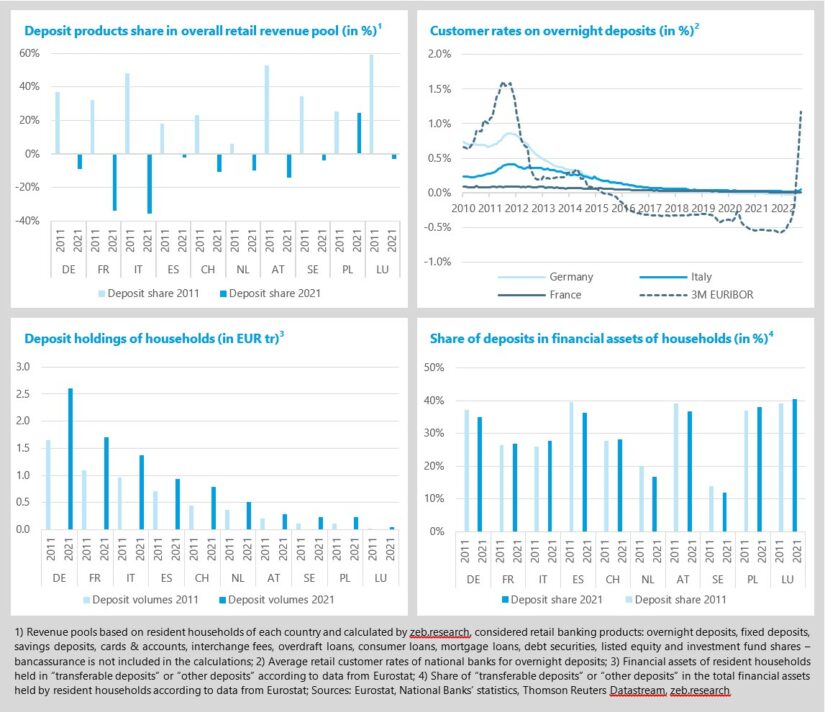 We analysed ten selected European retail markets[1] in detail by looking at the balance sheet of resident households, pairing it with price and margin computations to calculate retail revenue pools for these markets to answer the question “How much revenues can be generated with different retail banking products[2] in a given country and year?”. In 2011, before the zero-interest rate regime, deposits contributed approximately a third to the overall revenue pool across analysed countries – ranging from just 6% in the Netherlands to 59% in Luxembourg. Ten years later, however, contribution plummeted across markets to being a negative burden of approximately -13%, on average – except for Poland which only experienced a low, but not zero-interest rate environment. While overall revenue pools remained stable due to endless efforts to grow loan and fee-generating business activities, deposits turned from a highly profitable product to a cost factor in less than a century.

Now that interest rates are up again, banks can look forward to a trend reversal – at least to some degree. Assuming current implicit forward rates, the deposit business will become profitable again rather quickly and can be expected to contribute double digit shares to overall growing retail revenue pools across countries in the short to medium term. Just how profitable the deposit business is going to become again, depends on various factors. The pass-through rate of European banks, the (past) investment horizon of banks as well as the behaviour of customers will determine profitability.

Historically and on average, European banks have assumed an approximate 50% pass-through to their depositors – significant differences across markets can be seen, however, if one considers the different levels of overnight deposit customer rates observed in the period prior to the zero-interest rate regime. The slow and moderate incline in deposit rates that can currently be observed indicates a more cautious approach taken by European banks this time. Empirical evidence from Czechia also supports this notion: policy rates there were recently increased by 550 bp resulting only in a 20% pass-through.[3]

Another factor is the (past) investment horizon of banks. In some markets (e.g. Germany), a sizeable share of overnight deposit holdings by customers are traditionally used by most banks to invest in long-term products like interest rate swaps (up to 10 years) to generate secure, calculable and low-volatility returns with the portion of deposits that is likely to remain with the bank for long periods (“Bodensatztheorie” in German). In other markets (e.g. Poland), deposit investments as well as loan refinancing activities only consider horizons of a maximum of three months. Of course, banks following the latter approach can expect a more direct impact to their top-line results than banks with a longer investment horizon that put more emphasis on smoothing their returns.

Probably the biggest factor, however, will be the behaviour of customers, which itself is influenced by various determinants and structurally varies across markets. First, markets vary significantly in size. Not surprisingly, the largest economies of our sample, Germany and France, also represent the largest retail deposit markets in terms of volumes, with EUR 2.6 tr and EUR 1.7 tr, respectively in 2021. Households’ inclination towards putting their wealth into deposits is, of course, another factor influencing the overall deposit volumes across markets. Looking at the total financial assets held by households, only 28% are held in deposits by Swiss households, 17% in the Netherlands and only 12% in Sweden. In Luxembourg (40%), Poland (38%), Austria (37%), Spain (36%) and Germany (35%) deposits play a far more significant role in terms of their share in the national financial assets of households. Second, it remains to be seen how the capacity of households to accumulate savings amid soaring inflation rates will develop in the quarters to come. And where will the households put their remaining savings – into deposit, investment or insurance products? Third, one must keep in mind that the deposit market has changed significantly when it comes to its size, but also its competitive landscape.

Before the zero-interest rate regime, there were mainly traditional banks competing in often national markets. Since then, the number of market players has increased and the players themselves have become much more diverse. Today rather small providers of specialized financing, neo and online banks have taken the lead in offering interest rates on deposits (e.g. ING, German DKB, C24 or Klarna). On top of that, the battle for market shares is now being fought throughout Europe (or even globally). Platforms like Weltsparen allow customers to conveniently put their deposits with banks from virtually any country in Europe – making it easier to find the best offer.

Overall, the deposit business is experiencing a renaissance with the private customer business segment profiting the most. The sudden increase in profitability, however, is also likely to increase competitive intensity in the business – both from established and new market players. A “battle for deposits” is looming with potential cash outflows threatening the earnings turnaround. European banks will have to find the right balance between offering attractive returns to their customers while keeping their margins as high as possible. A good pricing strategy, customer communication and a trained sales force will be of paramount importance.

All data and calculations of this issue are based on the date of November 1, 2022. The global top 100 banks cluster contains the largest banks by market capitalisation on December 31, 2021 and is updated on an annual basis. Data is subject to ongoing quality assessment. As a consequence, minor adjustments could be applied to historical data as well as forecasts shown in previous issues of zeb.market.flash.

What is your view on the European deposit business? 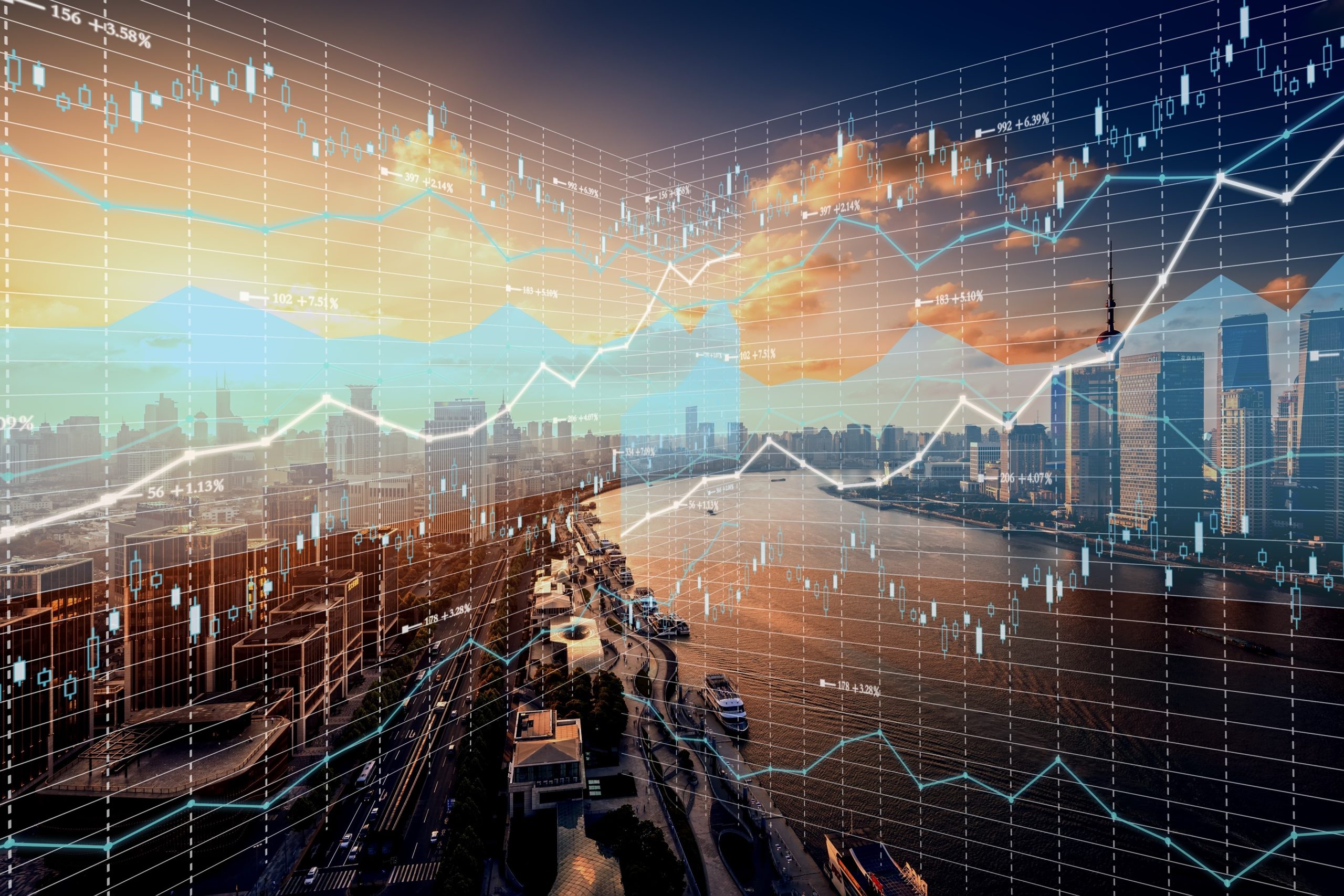 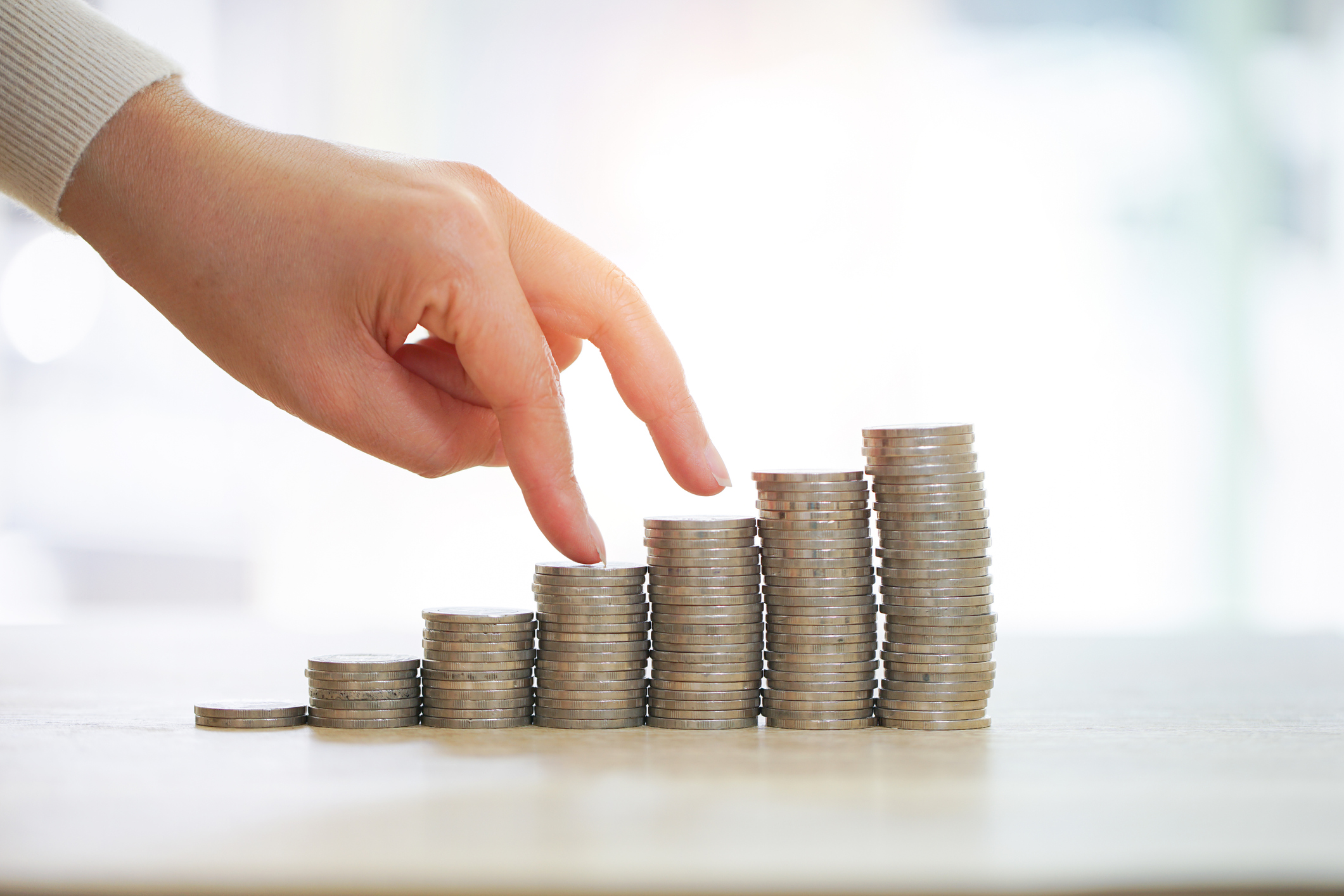