Part II: Complexity kills – How European banking models have to change in a complex world

In the first part of our 2015 European Banking Study we scrutinized the top 50 European banks with respect to their current situation, in particular performance and capital ratios. As we have shown, the general term “complexity” stands for the main driver of business success—or failure—within the European financial industry. In-depth analyses of business models, balance sheet and profit and loss structures led us to the alliterative conclusion that “complexity kills”. This article ventures a step further towards managerial actions that can be taken to protect banks from further harm and even to cope better with the challenging inherent organizational as well as market conditions. zeb recommends three fields of action which will be explained in the following:

Learning from the right peers

In our view, looking at worldwide peer groups and identifying successful banks is too myopic. In fact, simply trying to replicate the success of US, Chinese and Australian banks is not possible due to a completely different playing field in Europe.

J.P. Morgan for example manages to be within the top performance quartile in all three of their business segments: retail, asset and wealth management, and corporate & investment banking. But J.P. Morgan’s individual set-up as well as structures in their home market differ massively from European highly complex universal banks and their domestic markets. Just mimicking J.P. Morgan would mean a complete restructuring of European highly complex universal banks.

Other interesting markets such as China or Australia are also not suitable for copying business strategies from because Europe lacks a similar (windfall) growth story fostered by GDP growth. On the one hand, China shows a strong increase in banking intermediation (GDP to total assets) and the highest growth of net income in a stable yield environment. Similarly, Australian growth rates are clearly above Europe—increased banking intermediation having driven banking profits. On the other hand, Europe shows reduced intermediation (reduced role of banks within economy) with almost stagnating total assets—here banking profits remain under heavy pressure due to the lowest yield environment by far.

So, what are the “right” peers for European banks? In our view, “European champions” that warrant a closer look behind the scenes can be found within each customer segment, business model and division. Figure 1 below supports the hypothesis that in each of our selected segments several institutions exist with positive returns. Some business models appear strong and robust, consequently surviving the shake out. Scrutinizing their solutions clearly makes more sense than trying to achieve the returns of financial institutions operating under completely different market conditions. 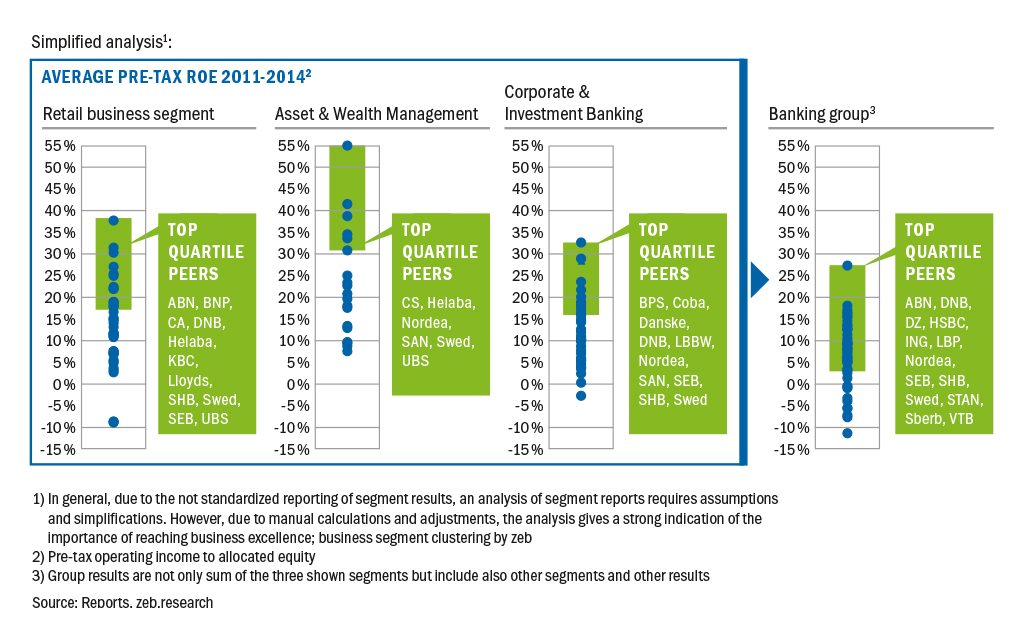 For example, Spanish BBVA is worth a glimpse because of their clear view on handling digitalization. As an internationally active, highly diversified retail bank in terms of locations and customers, it puts a strong focus on high-tech banking solutions as a step towards full digitalization. Since 2011, several start-ups from the areas of e-signature, cloud-based invoice payment, software for financial management of assets, etc. have been acquired. In 2015, BBVA completed the take-over of the leading Turkish Garanti Bank, one of the most innovative banks in terms of digitalization.

Spanish Banco Santander, one of the leading global retail banks, is a good example for high operating excellence through standardized products and an integrated operating model enabling high volumes and efficiency. The cross-national standardized business model with operational integration utilizes synergies and transfer of best practices across the group.

With regard to major changes, the Swiss UBS Group is a prime example for a fundamental transformation of an existing business model. Completely shaken up during the financial crisis in 2007/08, the bank’s management decided to give the group a new legal structure, to cut the investment banking and to focus almost completely on global wealth management and Swiss retail business. Since 2012, the bank’s capital market performance and current valuation is among the best in European banking. Other institutions trying to recalibrate and reshape their business model by focusing on some core areas instead of offering all products in all markets to all customers include Europe’s largest bank HSBC as well as Deutsche Bank and Credit Suisse which have already announced changes to their business models.

Business excellence needs to be accompanied by efficient group management. In particular, middle management structures have to be streamlined.

Our analyses show that, at a management level, esp. “Chief” and “Head” functions are comparable and that retail champions like Wells Fargo, Santander and Garanti exhibit relatively few “Head/Chief” positions. On the other hand, universal banks exhibit significantly more overhead leading to the conclusion that there is room for improvement. This becomes even more apparent when compared to peers with lean structures, such as J.P. Morgan or Citi Bank.

zeb conducted exemplary calculations for highly complex universal banks and highly complex retail banks respectively. As shown in Figure 2, thinning out middle management and fostering higher efficiency in the utilization of staff proves to be a major lever. 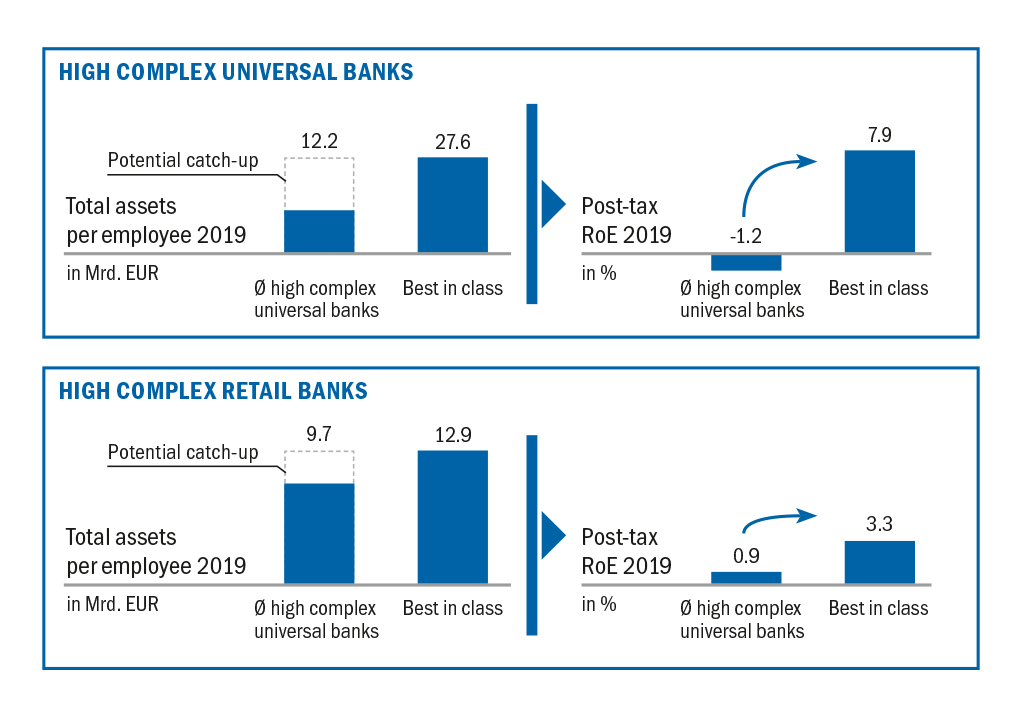 Another observable aspect is the “renaissance of decentralization”. We find that successful banks allow for a greater degree of direct P&L accountability and employee empowerment. For instance, typical successful Handelsbanken exhibit characteristics such as one branch = one region = one P&L, focused support functions in regional centers, and a small number of headquarter functions. This leads to a straightforward accountability and very few redundancies in the organizational structure.

Another good example—even though US-focused—is Wells Fargo. This bank exhibits a harmonized product and operations platform by using a top-down approach. Moreover, it is well-known that the collaborative working environment promotes team spirit. All this has an impact in a sense that it creates a strong focus on individual tasks and responsibilities, a stable framework and targets regarding business and operating model, high execution power (e.g. fast integration of new subsidiaries), and avoidance of redundancies in functions and accountabilities.

Rebuilding the business model and talking about it

The third field of action considers the rebuilding of banks’ business models. In fact, with regulatory pressure to stay high for the next years, the business model mix as well as the geographic footprint needs to be recalibrated. In our opinion, it is not feasible to offer every product for every client in every region—it is time to refocus on core qualities.

To be more precise, the evaluation of banks and banking models is determined by the benefits due to synergies and the cost of complexity. However, the regulatory environment has changed this equation and thus the view on banking business models substantially. Regulatory initiatives with explicit costs of size (e.g. Total Loss-Absorbing Capacity (TLAC), structural separation, etc.) reduce the benefits for large institutions. On the other hand, costs of complexity (e.g. coordination costs) increase due to rising efforts to comply with regulatory requirements. As a consequence, the optimal level of complexity, i.e. the optimal trade-off between synergies and costs of complexity, and size shifts downwards (Figure 3). 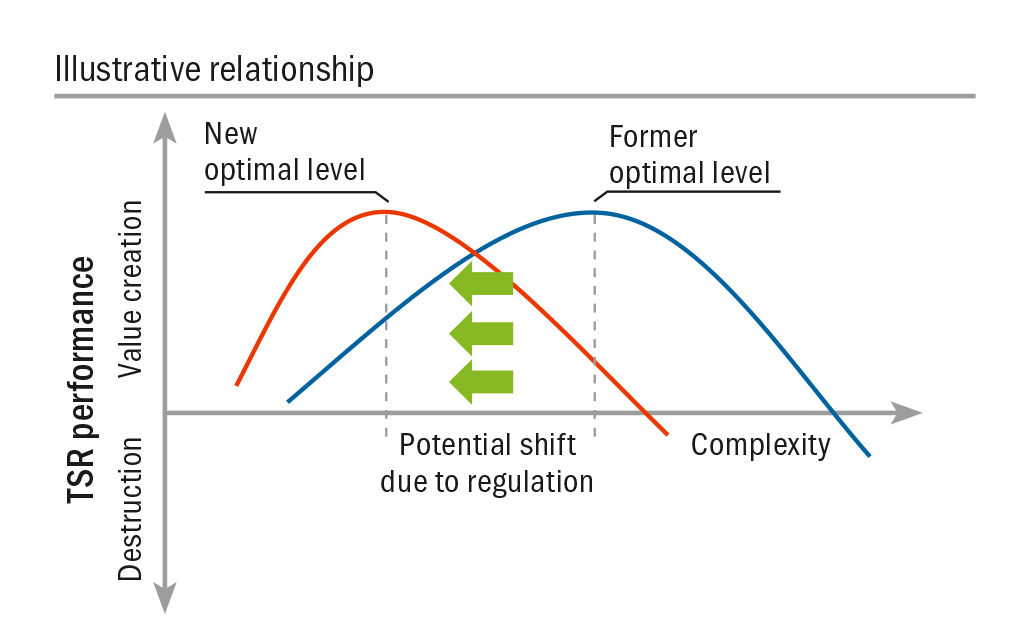 Now, for benefits due to synergies the situation is similarly challenging. In many cases, synergy potentials have become difficult to achieve. For instance, increasing earnings by using cross-selling potentials between business areas or within a single business area or the potential of different sales channels is becoming more difficult to achieve due to regulation  or even completely impossible due to a “silo” mentality. Another trend is platform sharing which promises lower expenses by using shared platforms for different business areas and economies of scale through centralization. However, MiFID II / MiFIR (Markets in Financial Instruments Directive / Regulation) transparency has led to customizing efforts on existing platforms or the setup of new “specialized” platforms respectively.

After all, all efforts could be in vain if policy makers remain unaware of the combined impact of high complexities due to regulation and low yields. In our opinion, representatives and decision makers need to be engaged in discussions time and again.

To put it in a nutshell, each European bank is required to have transparency and hands-on skills regarding the analysis of its status quo and the situation of relevant peers. Furthermore, banks should foster transparency about organizational structure / middle management thickness and further efficiency levers across divisions and functional areas. And finally, a clear understanding and reliable simulation methods regarding the future impact of regulatory initiatives and low yields on the business model, relevant KPIs and management levers of a bank are essential. 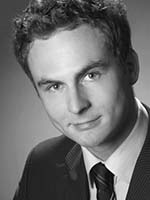 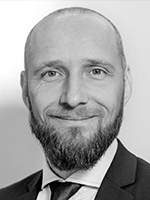 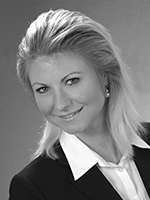