Fully automated identity checks when opening an account? Automatic immobilizer activation in leased cars if an installment has not been paid? International bank transfers credited to the recipient’s account within seconds? Sounds like science fiction? Yes, but blockchain has brought us one step closer to this vision. The topic of blockchain should not be missing at any innovation event or in any fintech blog today—its fields of application are however still limited. A previous BankingHub article has broached the topic of “What is the blockchain?” while this article will tackle the question of “What is the purpose of the blockchain?”. We will particularly cover three different groups of opportunities for applying the blockchain in retail banking: identity management, contract management and payment transactions.

Fully automated identity checks when opening an account? Automatic immobilizer activation in leased cars if an installment has not been paid? International bank transfers credited to the recipient’s account within seconds? Sounds like science fiction? Yes, but blockchain has brought us one step closer to this vision.

Authenticating customer identities is a frequent task in the relationship between banks and their customers and entails considerable efforts for both sides. Know Your Customer principles and anti-money laundering standards do not only require ID checks of new customers but also frequently involve a substantial review of business relations. Different solutions are currently used including a manual check by bank clerks, mailing copies of IDs as well as modern processes like video chat via IDnow or WebID. However, none of these solutions are ideal for banks or customers. When opening a new account, customers need to restart such a procedure from scratch and a prior authentication, e.g. from other banks, cannot be reused. This is where the immutability of blockchains comes into play. In art trade, identity checks are used to allow collectors to verify the authenticity of a work of art quickly and efficiently. In the digital world, these solutions work like a digital signature. In the trade of physical works of art, technologies use a special watermark to either prove the authenticity of a work of art or the complete documentation of all transactions. The latter depends on authorized parties entitled to verify the authenticity of a work of art and the consistent use of technology for all resales. Its application can be expanded to the banking sector and the following scenario might soon become reality:

A customer verifies their personal data with an authorized party. This could include banks, public authorities or specialized companies, for example. From now on, these data can be checked by all members of the blockchain using a public/private key process[1]. This enables the customer to open a new bank account without filling out endless KYC questionnaires or to sign their tax declaration at the “online tax office”.

This procedure is not only convenient for customers, it also facilitates processes for banks by completely automating onboarding processes and even allowing partial automation to perform in-depth authentications more quickly. The FATCA (Foreign Account Tax Compliance Act) authentication of customers for US tax obligations can also be simplified. In particular, a legally compliant procedure approved by US authorities would significantly facilitate the authentication process for banks, which would make it highly appealing.

The use of blockchain in identity management is not limited to the onboarding process, but can be applied to additional services in the course of the customer relationship—the previously mentioned identity verification can replace a signature.

For banks, blockchain will not only simplify processes but also open new potential business areas. Despite the current financial crisis, the German public still has a high level of trust in banks—there are thus major potentials for a fee-based authorization service similar to PostIdent, but using blockchain.

The second broad field of application for blockchain in retail banking is concluding contracts. The blockchain is not limited to storing information such as the account balance or date of birth, but can also store functions. In a nutshell, key components of contracts can be automatically activated. The following example shows the numerous application areas of these “smart contracts”:

A customer takes out a consumer loan to purchase an entertainment system. Full access to the system is granted as long as the customer pays the installments. If an installment payment is missed, the screen will turn blank.

This idea can be developed further and expanded to other bank products such as car or construction financing. In particular, the combination with the internet of things provides major opportunities for banks to assert their contractual rights without the need for a collection agency or legal proceedings. If customers agree to such a contract, they can be offered more favorable terms. A similar concept exists for insurance customers who can pay reduced premiums if they share fitness and activity data with their insurance. Current legislation, however, does not include smart contracts yet and a changed legal situation may throw a spanner into the works.

Smart contracts are not only a blessing for banks. They might also directly affect their business model. With smart contracts, retail customers will be able to agree on financing directly with the seller when buying a car or home and forcing banks into the role of the passive onlooker. P2P lending takes a similar line: currently still requiring a bank in the background, smart contracts might make them redundant in the future. This is a direct attack on the core business of a retail bank.

The third field of application directly interferes with payment transactions. Blockchain can simplify and accelerate international payment transactions, in particular. At the moment, international transfers still take several days and involve high fees whereas with blockchain technology, they can be realized almost instantly and at minimal transaction costs. Payment transaction products based on blockchain, such as Ripple, have the potential to replace centralized systems like SWIFT and to jeopardize the business model of the small number of large banks in the area of cash management. In this context, Ripple is the system currently used in practice (e.g. by Santander) and works as follows:

Customer A authorizes their gateway (e.g. the bank) to transfer a certain amount to Customer B. An algorithm is used to find the shortest path between the customers’ gateways and completes the transaction after the next blockchain update.

Another use of blockchain in payment transactions is bitcoin to which a previous BankingHub article was dedicated. Even though the currency has been quite popular for a while, bitcoin is not expected to replace the common currency system.  However, it is very likely that bitcoin will be established as the standard currency for certain purposes. Bitcoin or other crypto currencies can currently be obtained or managed by wallet services. Wallet services are not always easy to use and sometimes not particularly secure as a number of hacker attacks have revealed. Banks as managers and payment processors of crypto currencies can tap into new business segments and use the public trust and their secure and efficient IT systems to compete with other providers.

It remains to be seen if and how soon blockchain will succeed in retail banking. As with any technology depending on networks, its usability and security depend on the number of users. Santander with Ripple as well as bitcoin prove nevertheless that there is a demand for applications using blockchain technology.

[1] The public key is used to authenticate the sender while a private key encrypts or decrypts the data.

[1] The public key is used to authenticate the sender while a private key encrypts or decrypts the data. 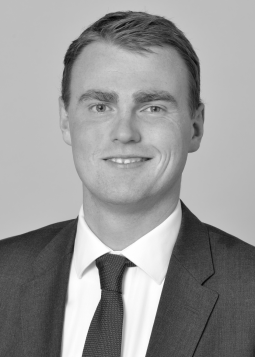 Use cases, opportunities and challenges—an interview with Michael Reuter (Datarella)

2 responses to “Blockchain in retail banking”