Optimizing mergers in the banking sector

Number of credit institutions between 1997 and 2016 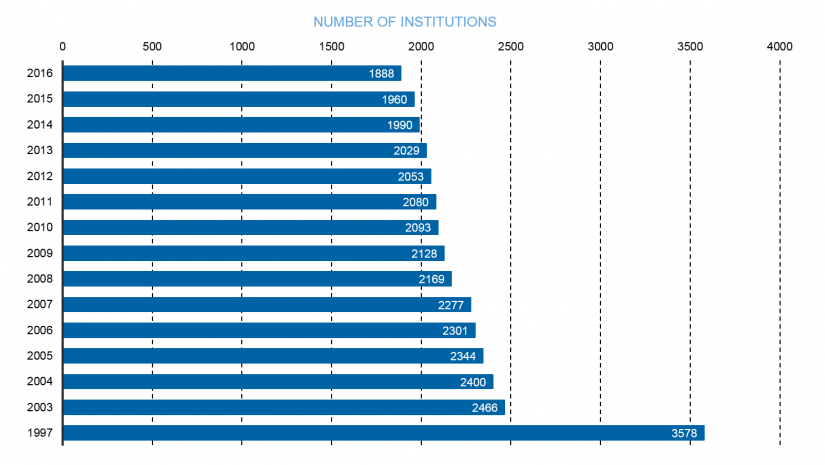 In many cases, the merger of neighboring institutions proves to be the logical consequence of the low interest rate policy as well as cost and income pressure. Moreover, occasionally disproportionate banking regulations impose procedures and activities especially on small banks whose existing resources are insufficient for fulfilling these obligations economically. The pooling of capacities therefore makes economic sense. A certain size offers strength and protection in a banking market which has reached an almost insurmountable level of complexity. Mergers of banks and savings banks will therefore continue in the foreseeable future.

As always in dynamic processes, it is by no means certain that the speed and intensity of this transformation will remain unchanged; rather, a “saturation” is to be expected in this process as well. However, when these will occur is not foreseeable—the German banking market will surely continue to be characterized by numerous merger projects. Indeed, not every merger project is successful, and by far not every merger project yields the financial, procedural and cultural effects that were initially defined. Knowledge of the relevant success factors and their intelligent handling are therefore essential for the success of merger projects in the banking industry.

zeb is the market leader in supporting banking mergers in Germany and knows the major success factors. However, these cannot be reduced to a simple formula, but have very different business, technical or cultural characteristics, some of which affect the entire organization and some of which have a more selective effect or are “at odds” with processes and structures.

A merger is a genuine project. It should be managed and carried out accordingly. Solid project management know-how is therefore required—and all that goes with it: project planning, risk management, stakeholder management, project controlling, reporting and communication, etc. “Only variety can absorb variety” (W. R. Ashby) is not only true in cybernetics. From the very beginning, a differentiated project organization should therefore be part of the specifications of a merger project. 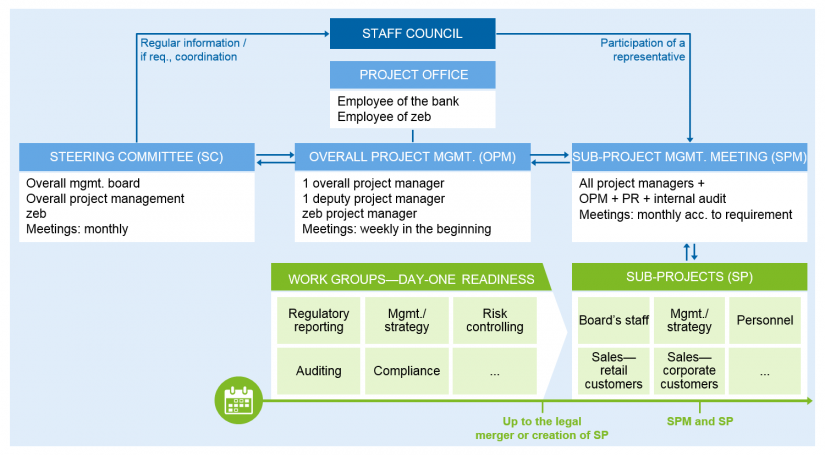 Highly complex projects—and bank mergers are naturally among them—can only be managed by dividing the whole project into tangible, meaningful and manageable units. zeb uses a milestone plan that covers the numerous aspects and facets of a merger and greatly facilitates the work of the merger partners. 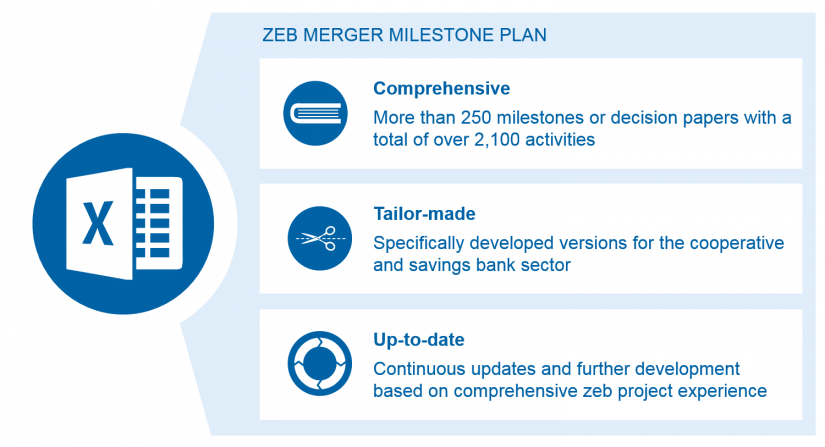 Accurate project planning, however, does not suffice. Looking back at various merger projects after a certain period of time, one often finds that the desired economic results have not been achieved and that the merged companies are still chasing their goals years after the legal and technical merger. A lack of consistency in leveraging income and cost synergies is frequently observed; stringent measure controlling has not occurred at all or only insufficiently. In addition, there is too much modesty in terms of business ambitions, a strong willingness to distance oneself from goals or even abandon them altogether once new environmental factors seem to force this to happen.

Thus, elementary success factors are described ex negativo: If the merger is to bear fruit in the future, stringent measures must be established and maintained even beyond the merger-related cut-off dates. This means that even after the end of the project phase, consistent management of the merger goals needs to be established in the line as well as in bank and sales controlling. This also includes preventing false modesty or a laissez-faire mentality with regard to the objectives right from the beginning. On the contrary, it can often even make sense to raise the level of ambition by another notch.

Success factor 2: Optimizing rather than functioning

Unlike only a few years ago, digitalization must now always be considered in merger projects. This makes merger projects no less complex, but this dual approach, merger on the one hand, digitalization on the other hand, is—as they say today—without alternative. zeb’s experience shows: merely restoring functionality after a merger does not suffice. Rather, the merged institution must be prepared for the requirements of digitalization. “Functioning” must turn into “optimizing”. This applies to strategies, processes, technologies, support and cooperation concepts, market cultivation, resources and much more. It is not just about harmonizing and integrating standards and processes, but also about their questioning, correction and modernization. Customer service in the retail customer business, for example, not only has to be merged and continued on the basis of uniform principles, but also needs to be put to the test in the light of digitalization as well as cost and income pressure and taken to a new level.

The pressure to optimize affects all topics and areas within the bank. By no means must optimization be synonymous with picking out and implementing the supposedly best solution from the participating institutions. It may as well be the case, for example, that all previous software solutions prove to be ineffective and the emerging institution has to use new applications, new systems and technologies in order to be prepared for the requirements of digitalization. And one thing is certain: anyone who digitalizes nonsensical processes will end up with digital nonsense!

Success factor 3: Focus on the customer

This success factor should actually be top of the list. It may seem, especially in merger processes, as if the customer is in everybody’s way. However, even in the difficult and strenuous transformational phase, the customer must be at the center of attention. Strictly speaking, the customer needs to be incorporated into the organizational chart. This is usually not the case. Against this background, a merger process is an ideal opportunity to clarify the customers’ needs as well as questions of customer acquisition and retention in a structured manner and to integrate them into milestone planning.

Leaving customers standing in front of closed doors marked with “Closed for restructuring” must be avoided at all costs. During the merger process, the customer must remain in focus—the required self-analysis should not lead to customer interests being neglected.

Thus, the process of a merger can also be used to relaunch customer interaction—by using new formats of customer surveys, reviving customer advisory committees or piloting the use of omni-channel solutions. The usual customer communication about the merger, new opening hours or changed account information is generally met with little customer interest and often creates an impression of too much distance.

You don’t have to be a fan of Jack Welch’s somewhat rustic statements to recognize the enormous importance of cultural integration. Many procedural or technical issues are often based on cultural misunderstandings, personal reluctance or lacking communication. It is a cause for concern when, even years later, employees of a merged bank still have their old business cards reprinted—this is not a joke, but actual experience in more than one merged bank!

In this context, reliable leadership is crucial. This, however, can only be ensured if all leadership positions in the new bank are promptly (re-)filled and if the executive team uses the reorganization to agree new leadership principles. When doing so, however, the above success factors should be taken into account. The usual platitudes—“appreciation”, “feedback“, “level playing field”, etc.—will not be any help. Also, leadership positions should be filled based on valid suitability diagnostics. Otherwise, leadership issues are bound to occur even at an early stage of integration.

Cultural integration is a crucial success factor in the merger of credit institutions. It is important to note, however, that this is linked to phenomena that are hard to get to grips with. As usual when complex situations must be managed, it is helpful to make the main factors measurable. zeb has had a lot of very positive experience with conducting so-called “cultural baseline measurements” to identify cultural differences and potential barriers to implementation, to establish a basis for repeated measurements and create concrete stimuli for action and to involve the entire workforce in the transformation process. These are in essence nothing more than concise, technologically supported employee surveys which assess cultural differences and the status of the merger. 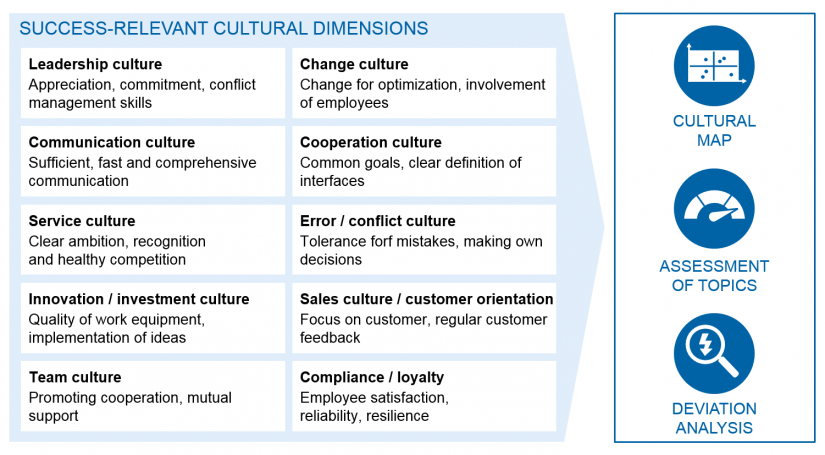 All this is part of the portfolio of change management. However, change management should not limit itself to the more or less competent use of various tools, but be based on a very specific attitude and sensibility: in the course of merger processes, board members will have to make unpopular decisions and point out inconvenient truths. And this is precisely what they should do rather than rhetorically sidestepping issues to avoid conflict situations. They need to differentiate between deceiving and disappointing. During merger processes, executives must have the courage to disappoint employees (loss of leadership position, change of tasks, longer commutes, etc.); but they should absolutely avoid deceiving employees regarding the causes, the process or the consequences of the merger.

The persistence of organizations and people should never be underestimated. It is therefore crucial for board members and executives to play a visible and active role in the merger process, explain the urgency of the process, acknowledge constructive participation and sanction obstructive behavior. And this is not just about preventing cynicism in the transformation process, but also and at least as much about taking fears and concerns seriously and responding to them in a professional manner.

To summarize, the following points are essential:

These are the key factors for the success of merger processes. If these are taken into account, neighbors can turn into real partners. 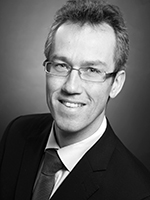 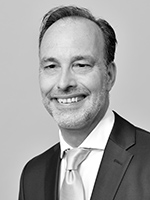 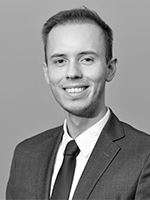 2 responses to “Optimizing mergers in the banking sector”