In recent times, many financial institutions have added digitalization to their strategic agendas. Front office related initiatives with direct impact on clients and revenues – e.g. online or mobile banking – have been and still are in the spotlight for many institutions. Although respective initiatives are increasingly conducted in the middle and back offices, they are focusing on traditional, transaction heavy areas. According to our experience, projects raising regulatory efficiency are rarely endorsed and funded.[1] Especially those projects, however, have the most efficient levers: Years of mounting regulatory requirements[2] have led to process elongations and therefore to additional costs in the middle and back offices. Increased complexity often renders a manual approach impossible at times but is definitely more time-consuming and error-prone. Highly qualified employees are misallocated to work on manual corrections and data preparation, instead of focusing on core competencies.

Even though the benefits would be obvious, illustrating a reliable, and for the senior management comprehensible business case, often proves to be very challenging. This becomes especially obvious when a digitalization/automation of an end-to-end process, i.e. a straight through processing (STP)[3], is envisaged. Without a pre-study and field-proven approach models, the overall complexity of the process and its dependencies, and therefore the total effort and benefit, can only be derived indicatively. By conducting a more thorough analysis of the as-is processes, focusing on the applied IT systems and interfaces as well as the quantity structure and related process times, a valid estimation of the potential is feasible. Beside classical automation approaches, the application of bridge technologies such as Robotics Process Automation (RPA)[4] should be considered; an implementation is possible without complex system integrations, so that existing opportunities could be leveraged in reasonable time and effort.

Some pioneering institutions are using the current momentum and taking a corresponding integrated banking view: Instead of a selective implementation of new regulatory requirements or supervisory complaints, chances are taken to analyze and optimize processes. By doing so, for example, reporting latencies are reduced to a fraction of their previous period of time or the manual workload of processing financial products is minimized. At the same time, quality is improved, productivity is raised and costs are reduced. Lean, end-to-end automated processes are therefore not restricted to FinTechs, but are a precondition for institutions to leverage cost potentials and respond to competition.[5]

Potentials and critical success factors of an STP implementation can be demonstrated clearly by a project example. Starting with supervisory complaints regarding the intercompany funding process, our client has decided to solve the problem holistically and therefore to automate the respective product type across all IT systems—from deal capture into the trade system through the transaction processing and risk management to the downstream reporting and financial accounting processes—and by thus eliminating manual breaks. The project starting point and target solution are shown in the following figure: 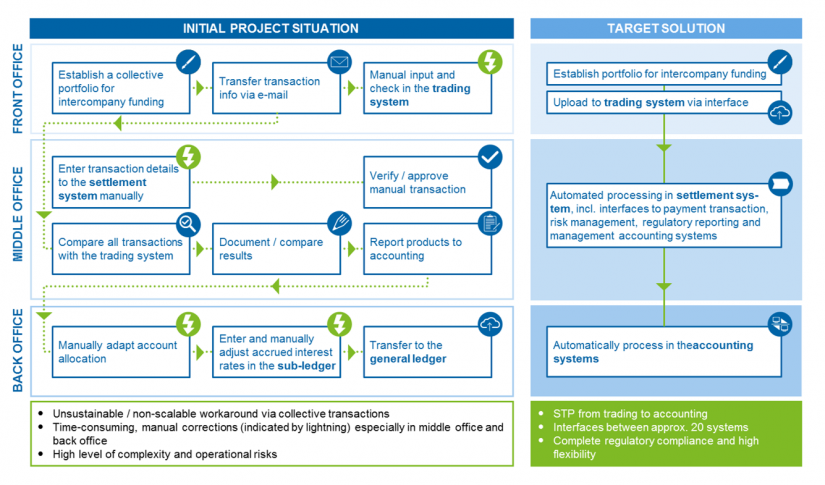 The STP target solution was successfully achieved: the manual processes and workarounds were reduced to a minimum—simultaneously reducing operational risks and strengthening the internal control system. As a result, all money market deals with variable interest rates and durations are processed automatically end-to-end. Adding to that, a scalability beyond the intercompany processes is ensured. The supervisory requirements are fully met and medium to long term cost reductions are achieved at the same time. Most importantly though: the quality of the intercompany funding process and the respective steering in Treasury have been increased significantly—also allowing institutions to react faster and more flexibly to altered market situations 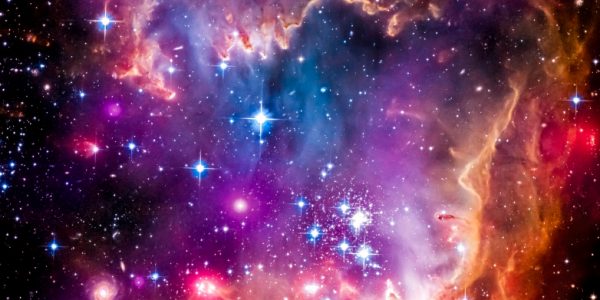 Based on the four major project phases of the case study, the success factors can be summarized as follows:

The potential of such initiatives—as exemplified here—is vast, and institutions should therefore ask themselves how to identify and realize the most promising initiatives.

To benefit from and actively drive the technological progress, a cultural change is usually indispensable. A very strong focus on result periods only, paired with a silo mentality obstruct ongoing STP initiatives and prevent the uncovering of optimization potentials. Hence, cultural change is the foundation for every additional point of action and therefore has to be exemplified by senior management. Strategy guidelines have to be refined and operationalized in that respect. Essential levers in the implementation can be found in currently running large (regulatory) projects[6] as well as in the planning of a future project portfolio. 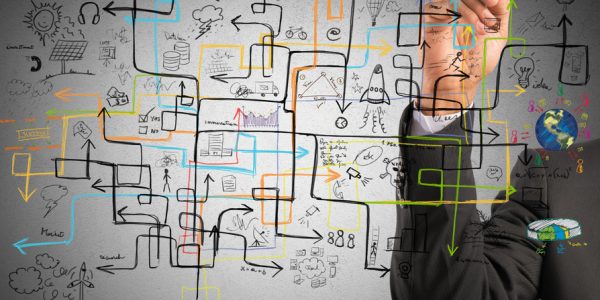 Mining-driven process controlling, or: What does the process look like?
Analyzing process data based on banks’ current IT infrastructure.
Read more »

Besides simply checking off the regulatory requirements, current large regulatory projects (e.g. BCBS #239, IFRS 9, Basel IV) are to be assessed in terms of potential beneficial aspects regarding organization, processes and systems—it must especially be asked where manual efforts can be reduced. A business case should generally be obligatory also for regulatory initiatives. The aim is the distinct deduction of benefit aspects and the demonstration of optimization measures and options in accordance with the overall bank targets.

A future project portfolio should be clearly geared to the digital objectives of the institution. An assessment of the degree of digital maturity of the institution serves as the starting point for a prioritization of potential projects. This assessment should consider the bank’s individual requirements and regard the end-to-end process respectively. Next to classical optimization approaches, such as  the exhaustion of existing system possibilities or this example, focusing on an STP implementation, additional automation potentials can be uncovered, e.g. by means of RPA.

Institutions should use the regulatory requirements as an opportunity and exceed their simple performance of duties by additionally reducing the size and complexity of their processes. A high automation or STP ratio simplifies and accelerates processes significantly, establishes new capacities for value creating tasks, and, ultimately, boosts profitability.

[1] According to a survey of national systemically important banks conducted by zeb, only 7% of the banks responded that they have implemented measures for increasing regulatory efficiency. Source: zeb.research study 2016

[2] The number of standards and guidelines published (BIS, EBA, ESMA, FSB and EU initiatives) has increased significantly in recent years (from twelve publications in 2010 to over 100 in 2016). Source: zeb.research study 2016

[3] Straight-through processing (STP) refers to the process of consistent, automated data processing, i.e. especially without manual work or media disruptions. In a closer sense (which the article is not restricted to), it refers to the consistent and automated processing of a financial transaction by financial services companies.

[5] According to the 2017 edition of zeb’s European Banking Study, which deals with the 50 largest European banks by total assets, a typical European bank can only close the majority of future profitability and capital gaps through comprehensive operational optimization programs. STP is one of the largest cost levers.

[6] On average banks use approx. 70% of their annual change budget (for 2016) for implementation of new regulatory initiatives. Source: zeb.research study 2016 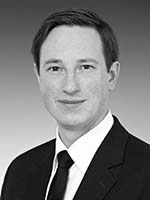 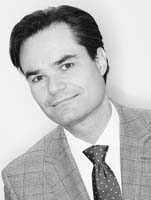