Central Bank Digital Currency and its impact on the banking system

Today we can observe changing habits and patterns of how payments are conducted. Although still prevalent, cash is becoming less popular and it is being replaced by different kinds of digital payments. This process is mostly visible in Nordic countries, where e.g. in Sweden, as of 2017 only 15-20% of retail payments were conducted in cash in terms of total number of transactions (while in 2010 it was around 60% of all retail payments).[1] Simultaneously, there are other ongoing trends which have a significant impact on payment systems in general.

Trends with impact on payment systems

The first trend of them is the “Internet of Things” – “network of physical devices, vehicles, home appliances, and other items embedded with electronics, software, sensors, actuators, and connectivity which enables these things to connect and exchange data”[2] and related machine-to-machine (M2M) payments where networked devices automatically perform payments without the manual assistance of humans. Other trends are: “Virtual Economy” – commercial usage and trade of digital data and content; new purchase patterns where clients expect convenient micro payments and their instant processing and last but not least, increasing demand for data privacy. All these trends combined, accompanied by a massive switch to digital payments, will push the introduction of a completely new payment system on a peer-to-peer basis, constantly available 24/7, instant and incurring only low costs.

The most prominent idea of creating such a system was building it on blockchain technology, which  enables the direct transfer of assets between participants without the presence of a third party. This feature seemed like a perfect fit taking into consideration new customers’ needs. Based on this approach, completely new payment systems were created, centered on various cryptocurrencies (e.g. Bitcoin, Ether, Dash). While this solution seemed very interesting and revolutionary at the beginning, many obstacles emerged and as for now, wide adoption of these means of payments seems impossible. First of all, the most significant hindrance is high volatility of cryptocurrencies. As the latest example shows, Bitcoin faces very serious value swings (e.g. at the beginning of December 2017 Bitcoin’s value was almost 20k USD which decreased to below 11k USD only within one month). Due to the inelasticity of Bitcoin supply (the maximum number of Bitcoins is locked), it will be more volatile than silver or gold, where the supply might be steered by mines opening and closing.[3]

In order to remedy this issue, ideas of issuing private “stable coins” or cryptocurrencies pegged by the Central Bank, where the exchange rate against the fiat currency is guaranteed, were analyzed. While the concept of coins pegged by the Central Bank turns out not be viable from a monetary perspective, so far privately issued “stable coins” either failed or their volume was insignificant.[4] Therefore, private stable coins could become part of a widely accepted payment system only in case of joint cooperation of major commercial banks on respective markets. Currently such concepts are being developed, either only for wholesale settlements between banks (e.g. Utility Settlement Coin jointly issued by Credit Suisse, Barclays, HSBC, Deutsche Bank and UBS) or individually for retail payments by Japanese banks – parallel initiatives of MUFG coin (Bank of Tokyo-Mitsubishi UFJ) and J-Coin (Mizuho Financial Group and Japan Post Bank).

An increasing regulatory backlash against cryptocurrencies, due to illicit activities connected to them and insufficient customer protection as well as a still relatively low acceptance rate constitute additional obstacles. Consequently, in the majority of cases privately issued cryptocurrencies are used only as speculation assets instead of typical means of payments.

One way to mitigate the aforementioned problems could be to create a completely new payment system of a Central Bank digital currency, based on the same logic as existing cryptocurrencies. However, in this case not a group of private entities, but the Central Bank would be fully in charge of the new decentralized payment system. The Central Bank would control the issue of cryptocurrency and guarantee a fixed exchange rate between digital currencies and fiat currencies. In such a setup, it will be possible to eliminate problems that hinder wide adoption of cryptocurrencies. Potentially, all central banks should be strongly motivated to implement such a system, because of their statutory duties. First of all, they are responsible for the development and introduction of a safe and efficient payment system, which contributes to the overall benefit of the society. Moreover, it will enable the creation of a new instrument which could replace cash in physical form, while still keeping its distinctive features (such as holder’s direct claim on Central Bank, guarantying its safety).

The CBDC system will be an environment parallel to the one based on fiat currency. Unlike traditional fiat currency systems, the CBDC system will be based on an asset class held outside of the traditional banking system. Thus, any conversion of existing non-cash assets into the Central Bank digital currency  will cause outflow of financial assets from existing banking system. Another distinctive feature of this system will be to conduct payments directly between participants, without engagement of third parties (such as clearing houses, settlement institutions, payment systems operators, etc.). This would lead to the elimination of all intermediaries that are currently present in traditional payment systems and revenues generated from them, also by banks.

Currently, several central banks are considering issuance of CBDC and they are working on the general design of such a system. There are various CBDC setups considered. Depending on the setup that is finally applied, there is a different impact on banks. The strength of this impact will be determined by several features of this newly designed system. 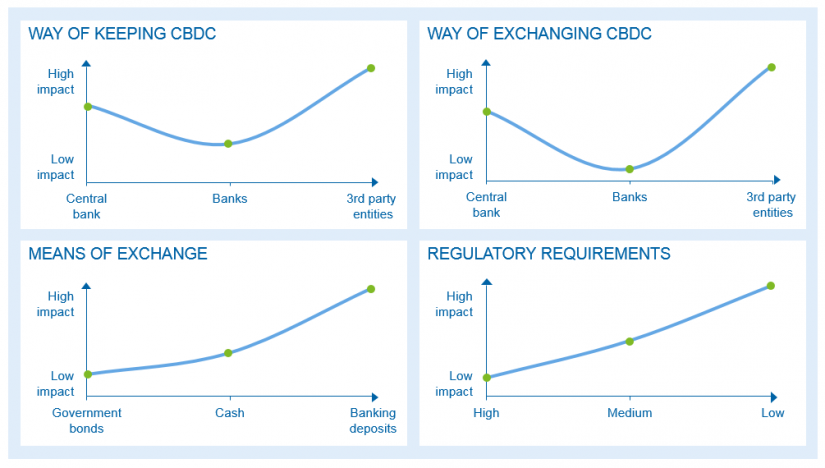 While these four features are the most important when analyzing the potential impact of the CBDC system on banks, there are also other considerations that should be mentioned. They include the approach to the CBDC implementation itself – whether it will be done gradually or issued as a one batch (“big-bang”). Moreover, there is the question whether CBDC will bear interest rates and if yes, how they are different compared to fiat currency interest rates. Also the level of existing interest rates and the economic situation in general will have considerable importance, because they will trigger general demand for CBDC (considered as a safe form of holding assets) and consequently the total value of assets converted into CBDC.

A model assessing the impact of CBDC introduction on banks’ revenues

As CBDC will have adverse effects on different participants of current payment systems (banks, settle­ment institutions, clearing houses, ATM operators, payment cards systems), we created a model to estimate the potential impact of CBDC issuance on bank’s revenues. In order to assess that, we simulated the impact on a selected bank in a given country, taking into account the characteristics of the particular market and institution.

The key assumption of our model is that CBDC will be merely an alternative payment system and that it will therefore negatively impact the banks’ profitability for two reasons :

In order to estimate the impact on a bank’s revenues, the model is structured in two major parts. Firstly, it concerns all market-specific factors for a selected country. Here, inputs are: structure of current split of payments, CBDC replacement rate and its structure (i.e. what percentage of all transactions combined will be conducted in CBDC and which types of payments transactions (cash, card payments, credit transfers) would be replaced by it), value of average payments transactions in selected country and money circulation factors (i.e. ratios between volumes of different transactions types to overnight deposits volumes).  Based on these values, we retrieve a volume decrease of overall overnight deposits and a total decrease of the number of card transactions (as other types of payment transactions typically do not generate direct transactional revenues). In the second part, we consider bank-specific factors, i.e. its financing costs in a given market and revenue structure. These two blocs combined enable the calculation of overall magnitude of two factors impacting a bank’s profitability. 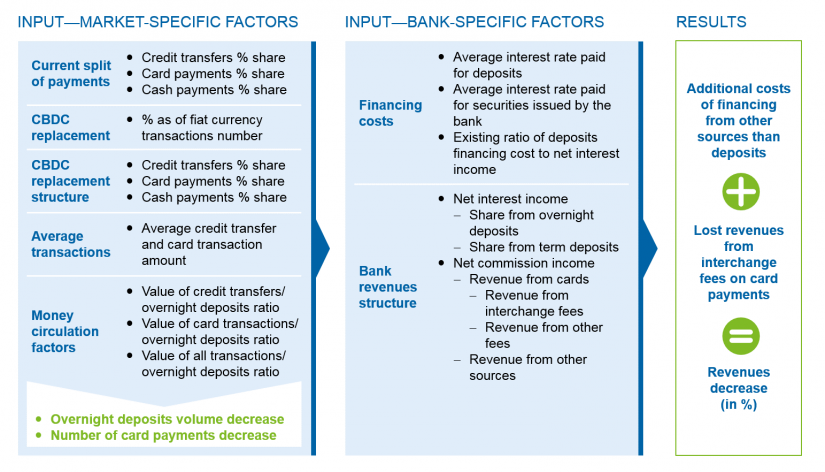 While the model can be used for any type of bank in any country, we decided to run our analysis on a major Swedish bank. We selected this country because here adoption of digital payments is one of the highest in the world, the Central Bank Riksbank is well advanced in considerations of CBDC introduction and will very likely be the first country to implement it.

We ran three scenarios for various CBDC replacement rates (respectively 5%, 10% and 15%). All market specific factors were taken as for Sweden (e.g. structure of payments, average value of transactions… in this simulation are the same as in Sweden) and bank-specific factors as for a selected major Swedish bank. 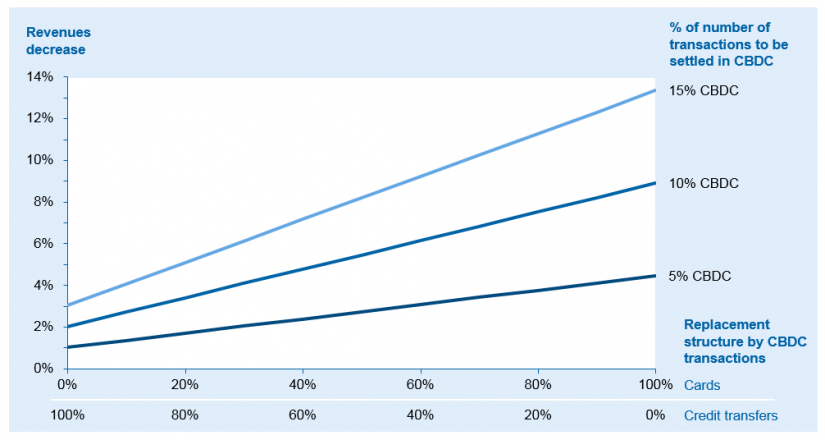 As we can see in the above chart, in specific circumstances, in countries where cashless transactions are more prevalent, and a given bank is more reliant on card transactions and financing from retail deposits, potential issuance of CBDC may have significant negative impacts on its revenues, assuming a do-nothing scenario, especially if transactions in a new system will be replacing mostly card transactions.

Given current trends in social development, the introduction of CBDC does currently not seem imminent. In the next years however, it is highly likely, especially in countries where cash is being quickly displaced by digital means of payments. Since it would pose a serious threat for the banks’ profitability in the long run, the following set of options should be considered by banks as actions that would at least allow to mitigate adverse CBDC consequences – but could also enable leveraging on a new payment system: 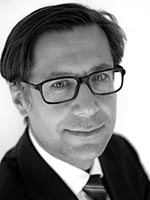 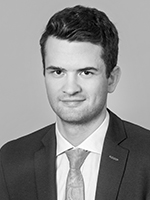 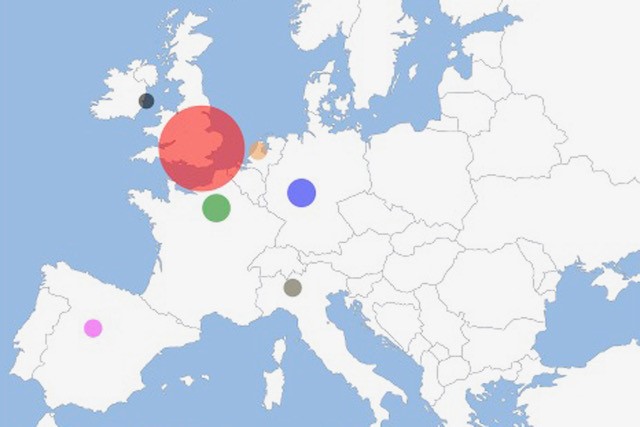 Corporate and Investment Banking After a Hard Brexit

Propositions on the Impact on Frankfurt

Use cases, opportunities and challenges—an interview with Michael Reuter (Datarella)